Fiddler on the Roof at Wolf Trap

Fiddler Plays a Melody on the Heartstrings

Fiddler on the Roof is a theater classic for long time fans and new audience member alike, featuring some of the most popular songs of our time. Atlanta’s Theater of the Stars and Wolf Trap’s presentation of the original New York stage directions and choreography by Jerome Robbins fulfilled every expectations. Whether it was the wickedly funny banter, the spine tingling vocals or the jaw dropping dance choreography, there was something for everyone, young and old, to enjoy. Expertly recreated by Norb Joerder, beautifully set by Paul Sannerud and conducted by John Visser, this show was a treat for everyone. 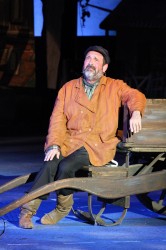 Tom Alan Robbin as Tevye. Photo by Theatre of the Stars.

The Fiddler (David Enriquez) kicks off the Tony award winning show with his haunting fiddle melody as Tevye (Tom Alan Robbin) effortlessly sets the mood with his character’s presence alone. Tevye must navigate the treacherous waters of marrying off his beautiful daughters Tzeital (Erin O’Neil with an angelic voice ), Chava (the firey Ephie Aardema), Hodel (fun and flirty Megan McGinnis), Shprintze (the Shelby Mullins) and Bielke (Abby Goldberg who demurely played her way through scenes with a precocious charm and professional air unseen in some performers twice her age).

His wife, Golde (a spectacular Susan Cella) and her matchmaking friend Yente (Barbara Tirrell, who knocked the audience out of their seats with her side splitting performance) attempt to over see the engagements, but can Tevye’s love for his daughters equal his traditional sentiments?

Suitors Motel (Zal Owen adorably quirky), Lazar Wolf (Richard Pritt matched Robbin’s wits and conversation t*t for tat), Perchik (a true golden boy, Justin Packard) and Fyedka (with his noble features and golden hair, Michael-Kennen Miller filled his character with a delightful energy) wooed the girls with love and humor. The Rabbi (a very traditional, but comically short Joel Bernstein) and The Constable (earnest and commanding James Young) watch over the proceedings in their own ways.

Though, without a doubt, each musical number was a crowd hit, there were some obvious favorites. The popular “Matchmaker, Matchmaker” received wild applause and Teyve’s “If I were A Rich Man” had fans singing along in their seats. “Sunrise, Sunset”, a haunting tune by Robbins, Cella and Packard moved some to tears, as well as McGinnis’ “Far From the Home I Love”. Also notable were Robbin and Cella’s duet “Do You Love Me” and the final number: “Anatevka”.

An absolutely beautiful and moving production and performances that shouldn’t be missed.

Running time: Two and a half hours long, with one intermission.