Fools Call It Fate at The Mobtown Players

“There’s nothing like misery to kick up a good thirst.”

Upon entrance to the Mobtown Theater, the promise of a mysterious, yet totally cool experience is present. With black walls, red seats, and a tiny bar (free wine!) to greet you, it has the feel of a alt music lounge. Beautifully eerie and atmospheric music played as a prelude, set the tone as well. The friendly staff of Mobtown complimented the hip club feel. Think the original intimate 9:30 Club with theatrical arts showcased, in place of music. Producer Brent Englar was there to take tickets and greet. He was more than accommodating when I inquired about the music. Director Mark Franceschini was milling around and, by his totally relaxed and chatty state, and like the rest of us, he was ready to enjoy the show. 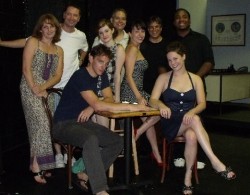 Fools Call it Fate is set in present time and allows us to peek under the sheets that are the lives of the everyman and asks some of the bigger questions: What is fate? Do we find it, or does it find us? Is it ever good to be bad? This play is well written and has very little drag time. It seems the cast agrees, as they delivered the dialog with relish and landed every barbed line just right.

With the one liners and dark humor, I found myself wondering why I had laughed so hard while being creeped out at the same time. When we discover them, these characters, all emotionally damaged to some degree, have alternately never met, already met, or known each other for years. We follow them into a well plotted and believable intertwining with helpings of all of life’s complications: love, sex, hate, betrayal, and more. Gifted actors portray the characters as follows:

Gabby is a doctor who is less morally correct than she may believe. Let’s just say she makes life’s lemons into heavily spiked lemonade. Deb Carson was perfect as this educated women who gets that life isn’t fair, but is determined to make it so by whatever means. Deb’s performance is strong and witty as she reveals layers of bitterness under her character’s “got it all together” facade.

Danny may be the least intellectual and complicated of the characters but he is not without his demons. Brian Kraszewski gives a great performance as someone who flies a little below the radar, for good reason. His portrayal of creepy, yet attractive and a little dim, almost wins Danny a smidge of sympathy from the audience. In the pub scenes, the troubled bartender’s opinion was ever present, by facial expression alone.

Sophie – the effervescent Melissa O’Brien shows good range as she takes the least jaded of our group from bubbly to angry as she faces disappointment in the two men she loves. O’Brien effectively relays the emotional decline as relationships falter.

Tara – We get the sense that she could have been lovely women, had she not been damaged by alluded to miseries in her life. Actor Rachael Lee Rash plays her with enough sweetness and flirt that we get a glimpse of light and hope under the cynicism. She smokes an electronic cigarette, but misses the act of putting it out, or “killing the killer,” an appropriate metaphor for righting the wrongs we are dealt in life.

Ash is the only character that seems to view life’s cup as half-full, and tries to learn from past mistakes to be a positive force for those around him. Will Carson does a wonderful job at being the nice guy and showing that Ash cares for Tara and wants to help release her demons. The tenderness between Ash and Tara is well conveyed through natural chemistry between Carson and Rash.

My husband and I agree that, if we had to pick a standout from this solidly talented cast, it would be actor Steven Shriner, who was flat out excellent. His character is Richard, a horribly unethical government food inspector who abuses his authority to forward his own perverted agenda. Shriner’s deadpan delivery and wit had my husband, a real life FDA inspector for biopharmaceuticals, howling with laughter. Shriner used good looks, charm, and perfect comedic timing to take this morally deplorable and unethical louse, and give him, if not a heart, a depth and humor that kept us riveted.

Although the program lists only six characters, audience members are treated to a seventh, vital personality, referred to only as “No One.” While it is up to interpretation whether these scenes are occurring within the minds of our characters or as nod to the Shakespearean aside, No One, and the ideas presented by him/her/them/it, is actually the center of the vortex of events that unfold.

The playwright’s experience as a novelist shined through at the end, where a diatribe of mind bending questions and answers that I wish I could have taken “to go” is presented. I felt the need to be able to hold these words on a page to linger over, rather than hearing them fleet off into the air.

Jesse Doggett’s creative scene changes, Carlos Guillen’s layered stage levels and complimentary background noise, and Bill Quick’s lighting were the core that kept the energy flowing and made this play work so well. When I commented on this at intermission, Franceschini relayed that he “hates when a play becomes about scene changes,” which was effectively displayed in the last scene. Without giving it away, the climax played out excitingly by the refreshing and original choices made by the production team.

In conclusion, Fools Call It Fate is highly entertaining and not to be missed. It runs through August 6. You may even catch Jessica McHugh there herself, beaming like a proud mama, and selling some of her novels. I scored a signed copy of Rabbits in the Garden and, if it’s anything like her play, I’m in for another roller coaster ride with a few dark tunnels along the way.