The title may refer to a “four seasons” theme here, as there are four short plays, disconnected in plot, but somewhat united by a theme of seemingly ordinary people doing something a little bit risky in different seasons of the year. A group of six actors, really two separate sets of three, an older group in their late 30s/40s and a younger group in their 20s, play the characters in these four slices of life. There is an element of the surreal here alongside some very naturalistic dialogue as each play does involve some element of the bizarre – including a man who wants to be a polar bear, a sports fan couple who may be the last remaining people in the stands for a pair of losing MLB teams, and a couple of slightly loopy strangers who meet on the 4th of July only to find they may be estranged cousins. Of the four short plays, Plunge, the final piece, is the most rewarding in its embrace of its challenge – the odd romantic date on a frozen winter beach. But all of the pieces are subtly quite affecting, if gone in a trice. 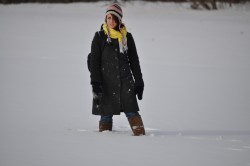 Ten minute plays are a tough form for any playwright or actor. They are a writer’s challenge, and a place for the development of compact ideas, if not, perhaps, for the general mainstream of theatre. Condense an entire world into just one or two scenes. Find broad colors of life in their purest reduction to one essential moment – a great one here being the rather symbolic random slamming of a pigeon into a cafe window during a conversation between two writers, suggesting their inevitable trajectories, perhaps.

Brent Englar is one of a select group of Baltimore area writers who has got a real knack for this sort of thing. His characters are very natural, with a good bit of wit and charm. But the scripts do rely on the natural charm of their players of course too, most of whom here offer nuanced and winning little performances, creating snapshots of some sweet human moments in just a few lines. Stand-out amongst the older gang is Rich Espey, whose long suffering Baltimore Orioles fan (with full B-more “ewws” for “O’s) in the first play Opening Day, 2050: O’s At Nats, builds both pathos and a great sympathy for his devoted loser. Each of the younger group of actors, Britt Olsen-Ecker, Alexander Scally, and Elizabeth Galuardi, all members of very talented Glass Mind Baltimore Theatre Company, excel at both awkward silences and potent one-liners, especially in Plunge.

A Year of Living Dangerously information and tickets.