Alice Roosevelt invites the audience for a cup of tea in Alice, an evening with Alice Roosevelt Longworth, daughter of Theodore Roosevelt. Set in the seventies during Richard Nixon’s presidency and the Vietnam War, Alice reminisces about her childhood, her marriage, and her family. Sitting in a cozy and polished living room, the enchanting Alice reveals intimate details of her life while her father’s voice echoes in the room, commenting, laughing, and asking her questions. 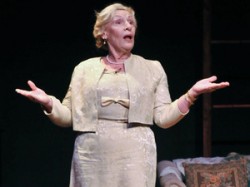 This personal portrayal of Alice Roosevelt, played by Joy Davidson, touches on Alice’s rivalry with her cousin Eleanor Roosevelt, her strained relationship with her father, and the tragic suicide of her only daughter. Alice Roosevelt may not be in as many history books as some of her relatives, but her opinions and stories illuminate the historic Roosevelt family in ways a history book cannot.

Alice, an Evening with Alice Roosevelt Longworth information and tickets.