If you put two h***y guys in a room with a girl, the story doesn’t get any more nuanced – even if it is The Apocalypse. Kevin Brotzman’s play, directed by Marshall Garrett, features some talented actors with great comedic timing, including Kevin Scheuring as Allen and Ryan Milliner as Scott, two roommates who nicely counterbalance each other. Madi Fergusson plays Suzanne, the not-so-hapless girl caught in the middle, and Michael Ridgaway does a turn as the slick cad who appears at the end of the play. 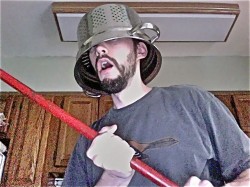 The play’s saving grace is in the touching way that the characters choose to fixate on and agonize over their own minor, awkward insecurities when they think the world is going to end.