The Disreputable Women present Boston Marriage, written by David Mamet – a bawdy play about two Victorian women, their maid, and a necklace that causes a whole heap of trouble. 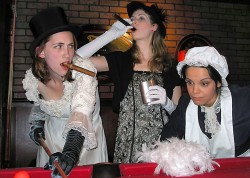 While I intend to keep the finer details a surprise, I will tell you that this performance basically boils down to a visual feast of emotions, ranging from sincere proclamations to downright catfights. Kathleen Alvania (who plays Anna) and Colleen Sproull (who plays Claire) are wonderful as privileged and snobby friends, but Nora Achrati steals the show as their hilariously dim maid, Catherine. “Proper” women hurling insults at each other in haughty Victorian accents proves very entertaining, and the name-calling gets so inventive that I have committed some of these gems to memory, if I should ever need to use them. The set and costumes are also rich in detail, which is a rare treat in a Fringe production.

The dialogue is hilarious, fast-paced, and bursting with innuendo. While highly enjoyable, this show is not for everyone. The language can be lofty, and is akin to what you would find in the works of Oscar Wilde. Had I not been an English major in college and already familiar with Victorian era language, I would have been screwed. All in all, a very enjoyable production.