Hamlet: Reframed stays true to William Shakespeare’s plot but omits the long-winded soliloquies. Presented by Grain of Sand Theatre Company and directed by Carl Brandt Long, this production injects the renowned play with modern technology and clads its characters in business attire. Apart from these stylistic flourishes, the production offers little in the way of novel content in its loyalty to the Shakespearian version. I would have liked soliloquies from Claudius (John Stange) and Gertrude (Sara Bickler) because much contemporary critique emphasizes the ambivalence of their feelings. Nevertheless, the cast members do not disappoint. 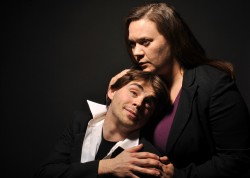 A panoply of consistently powerful performances awaits all theatergoers. Stange is resounding as Claudius, Hamlet’s stepfather and uncle. Bickler plays Gertrude, Hamlet’s mother, with poise and level-headedness. Sam Rabinovitz proves his dexterity as an actor in his role as Hamlet: One minute, he is grave, shooting sarcastic remarks at his parents with all earnestness. The next minute, he might be throwing jokes at Polonius (Jay Tilley) or matching Rosencrantz’s (Kelsey Meiklejohn) and Guildenstern’s (Jack Powers) energy and enthusiasm. Still another minute, he could be shouting wide-eyed at Ophelia (Kristin Rogers) or Laertes (Jesse Baskin). An unexpected highlight of the production was the dumb show, the play within a play, which the Players (Allison S. Galen, Liz Dutton, and Christopher Holbert) inflected with enough hyperbole to elicit a stream of laughs from the audience.