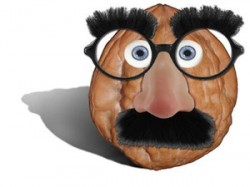 Nick Greek (the evil mastermind and star of I Like Nuts! (The Musical) is a comedic genius who could best be described as the love child of Andy Kaufman and Seth Green. Only one question burned in my mind after seeing this play: “Have I just experienced the stupidest musical ever written, or the most fun I’ve ever had at Fringe?” And the answer is… “Yes.” I won’t waste the internet trying to describe the story of young Horatio’s obsessive quest for knowledge of nuts, but simply tell you to take off your artsy-fartsy fringe pants and go have some fun at this show! There’s truly something for everyone to find funny here: the enthusiastic cast so committed to performing this silly yarn; yourself, for actually sitting in a room enjoying this absurdity with other people, and occasionally singing along; and most especially the look of utter horror on the face of the poor shlub next to you who took a wrong turn inside The Studio Theatre.

Writers Greek and C.T. Davenport have perfected the hat-trick of making comedy dangerous without being blatantly crass or offensive to anyone (massive innuendos aside, of course). Composer J. Watkins gives us catchy songs with titles like “Everyone I Know Is A Moron” and “Nuts Can Make You Bootylicious.” Director Heather Gaither-Greek and music director/guitarist Josh Speerstra have drawn a ridiculously polished performance out of their talented cast, though the script would be just as funny performed by a group of tone-deaf drunkards. As our nut-loving hero Horatio, Greek commands the stage with brilliantly twitchy physicality and a pleasing baritone voice. Rick Westercamp ably matches his physical comedy as sidekick Gary Goober, and the pair have some great chemistry together. Harv Lester and Jennifer Speerstra, as a couple of angry squirrels, each deliver musical highlight performances of the show. Other standouts in the cast include Timothy R. King as a struggling pirate stand-up comedian and Josh Drumwright as a soft-spoken vampire. Carolyn Myers, Vanessa Strickland, Christopher Michael Todd, Vanessa Kinzey and Amy Kellett round out the skilled ensemble. With four years of solid Fringe comedy under their belt, hopefully these Nuts will start producing theatre year-round. Our city needs more theatre that doesn’t take itself too seriously.