Manifesto! is a brilliant absurdist play inspired by the DADA art movement that attempts to define DADA while showing the different arguments made by the Communist and capitalist manifestoes in the form of a cabaret. The show’s dialogue primarily consists of fragments of texts from Dadaists, Communists, and Capitalists, and each ideology is represented through a character. 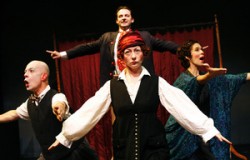 This is a play overflowing with genius from the entire cast that shows humor through their gestures and movements rather than through language. The actors employ slow motion flawlessly through their bodies and facial expressions, they sing to the audience and bring some members on stage to dance, and delve into intellectual topics without bringing them up with words. Also, the music is incredible and includes a drum set with sound effects, a trumpet, a violin, and an accordion all played by one talented Karen Hansen. Please go see this genius absurdist play that will confuse, delight, and inspire!