Ever since high school the words Moby Dick have inspired fear, boredom, sometimes enjoyment, but mostly apathy in the average American. Loose Ends Theater Company took on the artistic challenge of creating Moby Dick: An Adaption For Theatre using handcrafted puppets and masks, as well as eight interchangeable ensemble members. Though puppets are fun, the nearly hour and a half long show and strict loyalty to Herman Melville’s text might be a bit much for young children and those new to theater. The whirlwind experience of the awe inspiring set and the cast’s seamless interaction inspired the thought of beautiful dance, rather than a boring book from your youth. 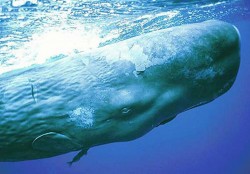 Ishmel (Drew Morrison) narrated the epic story of Captin Ahab’s quest for the white whale. Morrison easily switches between an older version of himself reminiscing and as a young man experiencing the tragic events. Amy G. Bergman (puppet craftsman and an appealing actress), Annika Campbell (from sweet to snap in a heartbeat), Judy Greengold (what a voice range on her), Josh Holober-Ward (hands down the most versatile actor), Alexandra Miller (complete control over her voice and expression), Anthony Pape-Calabrese (both comical and intense), and Genevieve Dalton Parker, (a powerfully successful example of women in men’s roles) rounded out the cast.