Though simple, Night Sky… is a production that attempts a somewhat realistic set, with a good bit of trimmings. While some shows at Fringe are totally minimal, suggesting great worlds of wonder and elaborate environments with as little as an umbrella or a folding chair, this show feels smaller than its stage, and tightened up to the real objects right there amongst the actors, who are game. 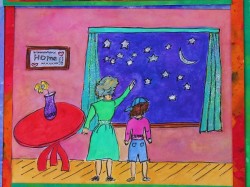 Playwright Patricia Connelly, here directed only adequately by Dorothy Neumann, makes a case for the old line that we are never finished growing up. This final sentiment of this play is touching, despite the frustratingly rather slow and flat production.

Lead actress, Faith Potts, a lovely aging DC actress with a sweet, grandmotherly presence, here plays that quality to the hilt, as a grandmother who is not willing to lose her long-time apartment or her best friend in the bargain. She and her friend, another grandmother and widow played by Barbara Rappaport, both are now looking to take some control in the last hours of their lives’ day, the symbolic time of the title, when night has come on and the stars are all that seem to matter.

The play is actually quite elegant and lyrical at times with its gradually unfolding drama as these two ladies deal with the predicament of being potentially pulled apart. At times, the performances are left stiff and uncomfortable, with plenty of apparent line flubs and one-note deliveries as actors seem to rarely ever loosen up to fully engage the light and subtle nuances of the script. But you have to feel for this cast of troupers performing in the hot Wonderbox space. They give it their all.