Fringe Review: Out of the Shadow

Most student theater deals with lighthearted themes and ham-fisted direction. So I was quite happily surprised when I saw this production dealing with subject matter that affects millions of kids each year in a very detrimental fashion. The subject of the 17 short vignettes was bullying. The performances were, in large part, heartfelt and true. It was obvious that the children who wrote this material (and the kids who performed the show wrote every word of it) were themselves very close to the topic. There were depictions of bullying for every conceivable reason: economic status, race, religion, sexual orientation, gender dismorphia, linguistic skills, and several others. Each vignette was treated as its own microcosm and, therefore, given real depth of thought. 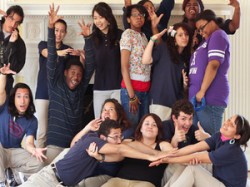 This show was part of the ‘Youth Led Producers’ program of the Capital Fringe Festival. In association with Young Playwrights Theater they developed an after- school program open to Middle and High School students from anywhere in the metropolitan area. These kids would meet and create scenes through improv and creative writing and develop a cohesive play that would be performed in the spring at schools and in July at the Fringe festival. The scenes were performed in various styles from slam poetry to interpretive dance to traditional theatrical productions, and each showed the dedication and creativity of the students that enacted them.