People feel a sense of calm as they watch fish swim serenely in aquariums…who would have thought that so much drama is going on in that tank?! Danny Pushkin’s charmingly unique puppet show Pascal’s Aquarium tells the story of a fuzzy purple lobster Augustine (the seahorse Manelle insists “I’m telling you, the dude is fuzzy!”), who must adapt to living in a restaurant’s aquarium after spending most of his life in the wide sea. Augustine (voiced and controlled by Vishal Vaidya) learns to control his hunting urges, falls in love with an upbeat sea turtle (Katie Nigsch-Fairfax’s Winnie) and learns some great life lessons from all of his new friends. Neil McFadden voices and controls the large fish Le’nard, who is the wise, foul-mouthed narrator, and Cheryl Fanene Lane easily switches between the characters of Mei-Mei the pufferfish and Gil the stubborn pirahna. 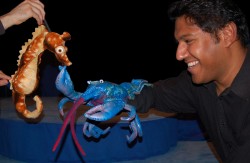 Standout actors/puppeteers in the show are Joey Ibanez who plays both King Prawn Akanahe and Jean-Christian de la Table, each of whom has a very funny and distinctive accent, and Jobari Parker-Namdar, who portrays the outgoing, gossipy seahorse Manelle. My favorite puppet was definitely the Shrimp Herd, which were 10 sparkly shrimp on the end of the fingertips of Vanessa Strickland, and I was also incredibly impressed by the puppet of the large catfish Le’nard, which needed an extra person (Guen Spilsbury) just to control the tail. The amazing puppets created by Eric Brooks and Don Becker are truly a sight to behold. Director Colin Grube wisely chose for the fish to be constantly moving, as real fish do!

Blue and green flowing fabrics create a lovely representation of water in the set created by Scene Designer Colin Grube and Scenic Artist Katie Nigsch-Fairfax. The songs (written by Eric Brooks, Danny Pushkin and Mylie Eugene Durham IV) are upbeat and meaningful. The accompaniment recorded by Growroom Productions’ The Mighty Heard was phenomenal with its enthusiastically funky sound.

Make your way to Pascal’s Aquarium! As one of the songs states, it’s “one in a million”!