The G & S Youth Company embraces the silliness of Gilbert & Sullivan’s Patience wholeheartedly in a well-directed performance that moves full throttle through the twists and turns of unrequited love. At the helm of the production is a lovers triangle of two dolts and a dairymaid. Sweet voiced Alissa Roca plays the title character – the lass who can’t say “Yes” unless it would pain her to do so. Her singing is quite stunning as she makes a challenging vocal role seem effortless. Her dueling fops, Rami Ayyub as poet and overwrought aesthete Reginald Bunthorne, and Michael S. Dunavant as vagabond narcissist Archibald Grosvenor, are both talented, spot-on in character throughout, whether bemoaning their lot in ballad or being pulled to shreds by their adoring admirers. 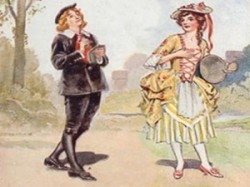 The supporting cast and chorus of swooning ladies and the flustered and blustering military men to whom they supposedly are betrothed are thick as thieves in stealing the majority of the laughs. I particularly enjoyed Luciano Masalli as pint-sized dragoon Major Murgatroyd — great fun in his performance and charisma to spare. Another standout performer is Lizzy Marmon as Lady Jane. She’s blessed with the kind of innate comedic talent that can be polished but not learned.

The entire troupe is put through the paces of some very fine choreography that adds a lot of visual excitement and humor, whether it’s the gaggle of fair maidens cavorting in aesthetic ecstasy in some Isadora Duncan-inspired frolic or the hearty dragoons shambling about like a flock of angry birds or strutting their stuff as newly minted aesthetes. Seriously funny stuff here!

Running time: One hour and 40 minutes, including a 5 minute interval between Acts.

Patience information. The show has closed.