In a word, mesmerizing. This is a transporting little play by Rabindranath Tagore, written almost a hundred years ago, that illustrates the life and role of a Sanyasi, a holy man who has cut himself off from the rest of society. There is not a great deal of conflict or complication, merely a portrait, but it is painted beautifully. 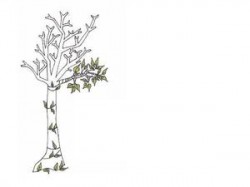 As director Amenah Bordi suggests in the program, though Indian in origin, this play does translate universally. Not only does every society have those people that set themselves outside of the cares and needs of others, but every human being can relate to this need to diverge and find solitude. However, the production uses carefully choreographed movement, beautiful songs, and sudden bursts of characterization to bring the audience to a familar place we may never have really been to before, the place of the ascetic, resigned and outside of all.

Most impressive in staging here is the use of a group of five very diverse actors of different race and gender, playing little moments from all levels of society, a community embodying a community. Uniformly excellent, this ensemble is each credited merely as “Storyteller”, the wonderful Nora Achrati, Amie Cazel, Thony Mena, Betsy Rosen, and Vishal Vaidya. All younger than 30, the cast of this performance justifies the price of the Fringe ticket, especially Evan Sanderson, though, as the lead, Sanyasi. His intense presence calls to mind the work of acting theorist Grotowski, with a visceral element to every word spoken, releasing some of his deepest energies in every second of this intense performance. He is not overwhelming, but a lot of the energy in the room seems to emanate from him without much effort.