Tap, tap… tap, tap, tap….tap, tap, tap, tap….tap, tap…tap,” goes the typewriter in the pitch black darkness. The voice of a man spills from the speakers surrounding the theatre, “Be a good girl, Sophie.” She taps harder. “Be a good girl.” This is how we’re exposed to the life of writer, feminist, playwright and advocate of women’s independence and sexual equality; Sophie Treadwell. Unfortunately, Treadwell’s accomplishments look great on paper, but hardly translate effectively on the stage in this one-woman play. Treadwell is a writer, a tortured, talented writer whose mental illness is not really explored or explained in great detail. I simply guessed that it was schizophrenia as Sophie, played by Melissa Flaim, kept referring to her writing as a way to “ward off the voices” and control “noisy self-doubt.” Allyson Currin’s play seems to be one for the modern-day woman struggling to maintain a sense of worthiness in a world controlled by men. 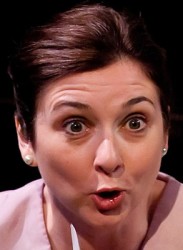 I wanted to care about Treadwell’s dilemmas: her troubled childhood, her struggle through the college years, her quest to be a great female reporter, her marriage to an older man, her affairs, simply because I’m a writer, too. But, I did not care at all. Treadwell bored me to small, crumbling pieces. The trouble with this play begins with the way the story of Sophie’s life unfolds. I was lost. Why was she so affected by her past? Did she really want to be a reporter or was she more comfortable as a playwright? Did she really love her husband or did she get married for comfort? The bits of her life are not quite added up by the conclusion of the play. Flaim’s screams and outbursts were the same for every single disappointment in Sophie’s tale. How many times can one drop to their knees in anguish before it becomes redundant? Sophie’s encounter with life was a collection of sordid details spread across a torturous 75 minutes.

The set and sound effects helps one to endure such a feeble attempt at portraying the turbulent life of a feminist. Three distinct pieces of furniture: a writer’s desk, a storage trunk, and two suitcases are spread across the stage. Each time Sophie recounts her childhood, years of college or stories she was eager to break as a reporter, she strides over to a furniture piece, sits or stands or leans against one of them as she remembers echoes of greatness in her life and scores of sadness as well. The voices of Sophie’s father, mother, grandmother, editor, husband, and those she interviewed as a reporter escape from the mid-sized speakers and offers a small relief from this tedious presentation. I actually chuckled when her soon-to-be husband’s voice echoed with glee when he first meets her – and even leaned in closer when her mother wailed tears of grief as her father left the house for the final time. But it was not enough to save this play. There are scores of other productions and performances to catch during the Fringe Festival.