Washed is a story about an alternate reality set in a penal colony in Mississippi during an outside unnamed epidemic and crisis. Throughout the play, biblical stories about Moses are told, which help these prisoners through their struggle and give them hope for a better future. Julius played by Dan Lachenman is an older man, Leah played by Caroline Gaddy is a middle-aged woman, and Hannah played by Megan Heatwole is a fourteen-year-old girl, and all have terrible secrets. 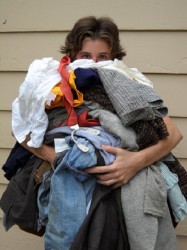 As the plot thickens, many mysterious events occur, and the penal colony seems to increasingly lose touch with the outside world that is quickly deteriorating. The show is about keeping faith and hope alive, even at the worst of times. interpretations, and a scrutiny of the often-blurred line between right and wrong. Though the production demonstrates a substantial amount of potential for success, it proves to be much too long, but could be improved with editing.