If you are a fan of Star Trek conventions you will enjoy this piece of the fringe. Now set a dinner mystery theater in that convention and you have our show. The action takes place in three acts. Act one is filled with strange transitions from comedic interactions to sudden diatribes. It is a bit jarring and preachy and in many cases stops the flow of the show. When the scene changes for act two the show hits its stride. The camp value and physical comedy bring you back around to rooting for our cast. Unfortunately, the show trips in the third act mostly due to unfocused performances that don’t maintain the quick clip that the conversations need in order to be truly funny. Overall, the show was a bit unwieldy and several performances were sorely lacking in energy and conviction. 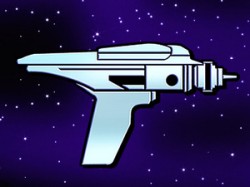 Reasons to see the show: 1) Jon Odom. Jon’s performance is sparkling as the Hispanic drag queen. He lands each of his lines with grace and panache. He is utterly hilarious and worth the price of admission alone. 2) Mundy Spears. Mundy forces you to fall in love with her a little as an awkward vulcan wannabe. Her revelations are focused and sincere and occasionally breathtaking. 3) Alex Perez. Alex might have a small part, but he has packed all the comedy of a two-hour stand-up performance into a five minute scene.