“Sha-la-la, stop right where you are. Don’t you move a thing!” The Infinity Theatre Company’s production of Little Shop of Horrors is playing at the Children’s Theatre of Annapolis, and you need to immediately run to the phone to order tickets to this amazing show!

Little Shop of Horrors tells the story of an unsuccessful flower shop, Mushnik’s Skid Row Florist, and the unbelievable stunt that gives nationwide attention to the run-down business. When crotchety Mr. Mushnik (Ira Denmark) threatens to close the shop for good, nerdy and bespectacled employee Seymour (Topher Nuccio) introduces his boss to a variety of fly-trap that he calls the Audrey II, after his dream girl, Audrey (Stacie Bono). While the plant seems to be a blessing, it quickly turns into a curse as its appetite for blood becomes insatiable, and Seymour must go to drastic measures in order to keep the plant alive. 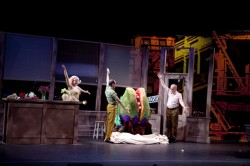 If you close your eyes and listen to Nuccio’s voice, you will think that Billy Crystal has taken over the role of Seymour. With his excellent comedic timing and subtle yet effective facial expressions, Nuccio draws constant laughs from the audience and endears them to the awkward Seymour. Bono’s voice is sweet and squeaky (as every Audrey should be portrayed) but the power of her voice is spectacular. Bono is especially impressive during “Somewhere That’s Green,” where she not only shows the strength of her voice but also the strength of her acting, as she goes through a range of emotions during the short tune.

Denmark’s Mushnik is the perfect grumpy old man, but his sweet side shows through when he looks after Audrey and encourages her to stay away from her “no goodnik” boyfriend. Speaking of the man who, according to Mushnik, is “not such a nice boy,” Audrey’s sadistic dentist boyfriend Orin is deftly played by Eric William Whitehead, who changes from the pain-inducing dentist in Act I to a variety of media personalities in Act II. While his voice is eerie and frightening when he speaks, Lamont Whitaker (the voice of Audrey II) is difficult to understand while singing. He needs to enunciate more in order for the audience to better understand him. Three sassy singing stars in the show are the doo-wop narrating trio of Crystal, Ronnette and Chiffon (Ariana Scoggins, Ardale Shepherd, and Martina Sykes, respectively), who are just as upbeat and enthusiastic during “Prologue (Little Shop of Horrors)” as they are during “Finale (Don’t Feed the Plants).” The girls especially shine during “You Never Know” and “Skid Row.”

Tina Marie Casamento’s direction is both hilarious and meaningful. She incorporates many sight gags, such as Seymour feeding Orin’s jacket to Audrey II and her spitting it back out. Casamento directs Audrey II in such a lively way that it seems as though the plant will hop right out of its pot! At the same time, Casamento makes sure to show the tenderness between Audrey and Seymour, and their interaction during “Suddenly, Seymour” is very intimate and romantic. Erin Denman’s spunky choreographer is as alive as the Audrey II itself, having the doo-wop girls look as though they are about to hit a sock hop and allowing Seymour and Mushnik to be hilarious during their tango/ethnic dance during “Mushnik and Son.” Adrianne Carney’s costumes are very appropriate for the era (denim Capri pants, head scarves and sneakers) and for the characters (Audrey’s leopard-print attire). Caite Hevner creates a multi-colored Andy Warhol-esque cityscape that contrasts with the dull colors of the flower shop, truly showing how much Mushnik is struggling at the beginning of the show. The only technical issue is the lights, which are very cold for a show that should be warm and bright. Lighting Designer Anshuman Bhatia, feed me some lights!

Suddenly, the Infinity Theatre Company is here to provide you…with a fabulous show! Make your way to Annapolis before the company makes its way back to New York!

Little Shop of Horrors is playing through August 7th at the Children’s Theatre of Annapolis at 1661 Bay Head Road, in Annapolis, MD. To purchase tickets, call (877) 501-8499 or order online.

The running time of the show is approximately 2 hours, plus a 15-minute intermission.