Mamma Mia! at The Filene Center at Wolf Trap

I always get a kick out of reading Fandango.com film critic Dave Barry’s column. He tends to like big, macho, manly action movies – yet will religiously give a pass to Disney’s National Treasure franchise. The reason: it’s something he and his mother can enjoy together. 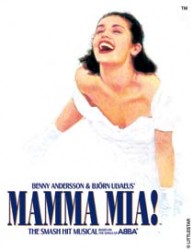 That’s kind of what Mamma Mia! is to me.

This guilty pleasure of a 70‘s pop musical is playing through July 3 at Wolf Trap’s Filene Center stage. In Benny Anderson and Bjorn Ulvaes’ Mamma Mia!, the catchy hooks of ABBA make it difficult to resist the urge to stand up and dance as many did on the Wolf Trap lawn throughout the evening. Director Phyllida Lloyd’s production delivers a raucously fun summer party, climaxing in a concert medley that transcends the energy level of any musical theatre production in recent memory.

The story revolves around the wedding of young Sophie Sheridan (Chloe Tucker, a platinum voiced ‘every-girl’) and her free-spirited fiancé Sky (hunky Happy Maloney). Sophie has been raised on a Greek island by her single mother Donna (Kaye Tuckerman), and when she reads her mother’s diary, she learns that mom was a bit of a wild-child. In an attempt to discover the identity of her father, Sophie secretly invites the three most likely contenders to her wedding… and madness ensues when Donna finds the three great loves of her life on the island at the same time.

Make no mistake, Kaye Tuckerman owns this production with her dynamic portrayal of Donna, along with her comic sister-sidekicks Tanya (Alison Ewing) and Rosie (Mary Callahan). A lot of young singers could learn something from watching these three seasoned musicians tear up the 70‘s pop score. The party really starts the moment they first hit the stage, and their performances become even more fabulous with each sequined costume.

Tuckerman’s Donna hits all the right notes: she wrings every tear out of the audience in “Slipping Through My Fingers” and blows the covered roof off in “Mamma Mia,” “Money Money Money,” and “The Winner Takes It All.” Ewing runs away with the show as a dazzling cougar Tanya, and the deft physical comedy and timing of Ewing and her cohort Callahan plays all the way to the back of the Wolf Trap lawn. Their respective performances of “Does Your Mother Know” and “Take A Chance on Me” are the highlights of the evening.

As the three loves of Donna’s past, the men don’t fare quite as well. Chalk it up to the fact that Act I of Catherine Johnson’s book does not give them as much to work with as her 2008 film screenplay (though if you’ve seen the movie, you’ll be pleased to find three men in this production who can ably sing the score). Tony Clements’ Sam Carmichael breaks away from the pack in the second act for some poignant musical moments with mother and daughter, and Paul Deboy delivers a pleasing pop tenor rendition of “Our Last Summer” as Harry Bright.

Wolf Trap is the ultimate venue for Mamma Mia!. The sunset itself plays a part in the magic, transforming Mark Thompson’s simple utilitarian set into a Mediterranean paradise under Howard Harrison’s lighting as we progress to the evening bachelorette party in real time. Sitting in the front orchestra seats, it is exhilarating to hear the crowds singing and clapping on the lawn behind you – and there is no better sound system for a live musical anywhere (every word comes through thanks to sound designers Andrew Bruce and Bobby Aitken, who build seamless transitions between dialogue and the full pop sound of Martin Koch’s orchestral and vocal direction). Looking ahead to the rest of Wolf Trap’s summer theatre season, it is exciting to imagine a terrifying wedding pogrom under the stars in Fiddler on The Roof, a midnight prayer meeting in Guys and Dolls, and a voyage into the night sky with Cathy Rigby in Peter Pan.

It’s clear to see why Mamma Mia! is a great musical. There’s something that every generation can connect with, and looking over the crowd, you’ll see people of all ages laughing, crying and dancing along. My mom gives it 5 stars, and so do I… and it was WAY better than the Michael Bolton concert I took my dad to for Father’s Day back in the mid-90’s.

Running time is approximately 2 hours and 30 minutes with one intermission.