Next to Normal at The Eisenhower Theater at The Kennedy Center

The Pulitzer Prize and Tony Award-winning musical Next to Normal has made its way back to the DC area with the national tour on stage at the Kennedy Center’s Eisenhower Theater. The tour does great justice to the heart-wrenching story through the expert performances of its cast. 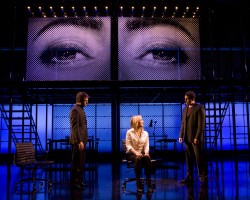 Next to Normal is a deeply powerful show with the potential to take you on an emotional rollercoaster of tears and joy and in this respect, this production does not disappoint. Telling the story of one family’s struggle with mental illness, Next to Normal is all too familiar to anyone who has ever been through that struggle or been close to someone who has. Striking a rare mix of serious reflection and wild entertainment, this show is a must-see for anyone who enjoys musical theatre.

The technical work on this show was tremendously impressive and closely mirrored the Broadway production. Mark Wendland’s set and Kevin Adams’ colorful lighting were beautiful, creative, and fit with the arcs of the story in a way that is rarely seen on any stage. The band gave an excellent rendition of this rock and roll score. My only complaint was that neither the band nor the vocals were quite loud enough to fill the Eisenhower Theater to the extent that an emotional rock musical really should. At times the sound didn’t resonate, seeming to only come from the stage and as a result, I felt disconnected from the show at those infrequent junctures.

This cast is hard-working and talented across the board, bringing their respective characters to life with admirable expertise. However, while Alice Ripley’s Tony Award- winning performance shines from an acting perspective, her voice is raspy and strained to an extent that it becomes distracting and unpleasant. Some of her painful struggle to hit notes fits with the plight of her character but she doesn’t rival the beauty of her earlier performances in this role. That being said, Ripley gives her performance everything she has, no doubt in part as a result of her amazing and commendable dedication to her fans and craft.

Even without Ripley’s powerhouse voice at full capacity, the rest of the cast sings the hell out of this extraordinary Tony Award-winning score by composer Tom Kitt and lyricist Brian Yorkey. In particular, Emma Hunton and Asa Somers are absolutely exceptional as Natalie and Dan. Hunton brings a distinctively energetic fury to Natalie and closes the show wonderfully with her vocals in “Light”. Somers sings beautifully in Dan’s various duets and especially shines in his rendition of “A Light In The Dark”. Curt Hansen as Gabe and Preston Sadleir as Henry give strong performances as well, doing justice to the score and adding emotional depth to the core family’s struggle through their interactions with them. I wish we could have seen more of Jeremy Kushnier, who blew me away in his too-brief moments on stage. His moments as a delusion-induced rock star psychiatric are particularly precious and believable.

Though some particular elements detracted from this production and force it to fall short of its potential, a cadre of amazing performances tell this beautifully familiar story with a satisfying and engrossing intensity.

Next to Normal plays through July 10th at The Eisenhower Theater at The Kennedy Center, in Washington, DC. Purchase tickets online, or call (202) 467-4600.

Running time is 2 hours and fifteen minutes with one intermission.