Pick Of The Fringe Awards Announced 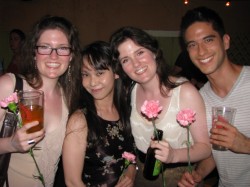 Read Cyle’s Fringe column ‘Fringing a While With Cyle‘.