POP! at The Studio Theatre’s 2ndStage

When you walk up the stairs to enter The Studio Theatre’s 2ndStage to see their production of Pop! one enters Andy Warhol’s Factory circa 1968. Everything is silver and the extras portray artists, freaks, and others along the way. As you take your seat there is a nude model being filmed to the left of the stage while other cast members roam the factory. The band performs typical rock songs of the era which blend into the background without a vocalist. Giorgos Tsappas, the Set/Prop Designer, takes advantage of every inch of the 2nd Studio to create the Factory. The set design by Tsappas and the cozy seating of the 2ndStage theatre creates an intimate theatre experience. 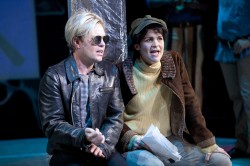 History reveals the answer of who shot Andy Warhol and it is not really a mystery. However, during a 90-minute visit in the factory one will discover how any of Andy’s companions would have had motive to shoot him. The musical also reveals how Andy Warhol may have brought the shooting upon himself. Tom Story stars as Andy Warhol in Pop! providing a strong performance through out the evening. He delivers the important “Paper Bag” number in the beginning explaining the significance of a simple paper bag to him. However, I felt his best performance came in the finale when he is taking pictures of everyone with guns. Tom Story takes his camera and turns to the crowd to photograph and it is like he is looking right at you.

Matthew Delorenzo portrayed Candy perfectly. A transsexual strives to become passable and he comes close to pulling it off. Only the program and his voice give intentional clues. There are unintentional clues as well like when he reveals too much of his cleavage. Matthew’s character acts as the narrator throughout the musical. Ivania Stack, the Costume Designer does a wonderful job with Candy and the rest of the cast. Each character represents 1968 well – including the extras.

Rachel Zampelli plays Valerie Solanas, author of the SCUM manifesto and a script which the man-hating character wants Andy to produce. Rachel’s vocals shine best in her solo on “15 Minutes,” and she keeps it going on “Big Gun” – a song which fits her character’s anti-male persona. Marylee Adams plays Edie, who is the rich girl with an appetite for drugs, and who at times resembles a twisted Shirley Temple. In my opinion Adams’ finest moment in the musical is her performance during “Paper Dolls.” The number really highlights Adams’ incredible voice.

Deborah Lubega plays the sexy, smart character Viva. Provocatively dressed to highlight her bosom, she proves she is more than just eye candy. She starred in many of the musical numbers throughout the evening and it is difficult to pick the best one. She was wonderful on her own numbers like the “Last Laugh” and she was equally impressive in supporting roles on numbers like “Big Gun.” Deborah’s acting during the bar scene was what was right with this musical. Having Marylee Adams and Rachel Zampelli play male artists during the bar scene is an example of something that I felt did not work well.

The supporting band is a critical element for the success of the musical. The band under the direction of Christopher Youstra sounded great. Guitarist Kim Spath changed from guitar, banjo and mandolin effortlessly. The musicians were never flashy, but they helped create the scene by the instrumental covers they were playing as the audience took their seats. They provided the musical background throughout the show to allow the cast to be the stars. The musical highlight of the evening was the “15 Minutes” number as the solos showed some of the best vocals of the night.

Pop! provides a creative, fun, and almost interactive theatrical outing. The production has a talent filled cast, a solid band, and an extensive set design.