Rock of Ages at National Theatre 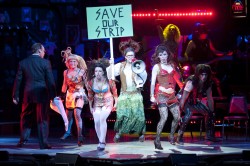 The cast of Rock of Ages. Photo by Dan Lippitt.

The plot is literally taken from an 80’s song. A small town girl runs off to California to chase her acting dreams. The year is 1987, and she meets a guy chasing his Rock and Roll dreams down on the Sunset Strip. The story is told using a soundtrack of 80’s Arena Rock songs. The performances of the songs are the strength of Rock of Ages. The musical delivers a fun entertaining mix of humor, a story, and an Arena Rock concert – all rolled together.

Constantine Maroulis plays the lead. Due to his American Idol fame, he is a draw. He plays a likeable character and his musical talents are highlighted throughout the evening. He was nominated for Tony Award for this role. Elicia MacKenzie plays the love interest opposite Constantine. The “friend” scene brought back memories of going down that road in my own youth in the 80’s. Patrick Lewallen delivers a strong performance as well. Playing Lonny and the narrator, Patrick offers several laughs as he keeps the musical light. He even uses accentuating props such as a “For Dummies” book, a Playbill, and various t-shirts.

Costume designer Gregory Gale had the costumes on the mark. I caught myself remembering people who dressed like his characters back in the day. I am not the only one who thought Gregory did a great job as he was also nominated for a Tony Award. The Rock of Ages band does an incredible job backing the cast as they perform an impressive list of 80’s songs. Music from Journey, STYX, Europe, Mr. Big, Whitesnake, Poison, David Lee Roth, Pat Benatar, Asia, Night Ranger, and more are performed during the musical.

This is a five star production! The cast was interactive and musically talented. The set design was effective and the costumes were well done. The lighting added to the show. The combination of the lighting, cast, and band sometimes made the show feel like an 80’s Arena Rock Concert. Rock of Ages ended up being part story, part comedy, part concert, and an entertaining musical. Don’t miss it! Rock on!

Running time: 2 Hours and 15 minutes, including one 15 minute intermission.
Rock of Ages plays through July 24th at The National Theatre – 1321 Pennsylvania Avenue, NW, in Washington, D.C. . Tickets can be ordered online or by calling Telecharge at (800) 447-7400.