Steel Magnolias at The Keegan Theatre

The Keegan Theatre presents Steel Magnolias, a play about love, friendship, sadness, and the strength of women, directed by Mark A. Rhea. The first thing you notice when you walk into Church Street Theatre is the remarkable set, designed by Trena Weiss-Null. Entirely transformed, what was once a stage is now an unmistakable beauty parlor, right down to the linoleum tiles. Open and spacious without being plain, the detailed set is spotted with feminine touches, including a crocheted cat tissue-box holder. 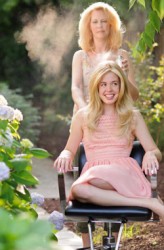 Costume Designer Erin Nugent smartly depicts every character’s personality through their wardrobes. For example, Clairee, a sweet-hearted and glamorous wealthy woman played by Jane Petkofsky, is shown in her colorful, dressy attire, while Annelle, played by Brianna Letourneau, is a meek, religious  young lady that dons simpler clothes. Sound Designer Jake Null takes us through a series of gunshots, phone rings, and radio music, which works together with lighting designed by Baron Pugh to create a realistic, enjoyable atmosphere.

In a clever and wonderful casting move, Laura Herren takes the part as Shelby, while her real-life mother, Sheri S. Herren, plays her on-stage mother – M’Lynn. Their natural chemistry and bonding is seen through this pairing, and both play their roles well, working off their shared dynamic and love for each other. It is so heart-warming to watch.

The entire ensemble is fabulous! But for me the show stealer came from Linda High, who played Ms. Ouiser. Each one of her entrances is an energetic one (once, she bursts onto the stage like a whirlwind, shouting, “I could just spit!”) and nearly very line of hers leaves the audience laughing. Larissa Gallagher (Truvy), Brianna Letourneau (Annelle) and Jane Petkofsky (Clairee) round out the group of friends and they are a hoot! The closeness of this band of women is apparent, which makes them easy to relate to. They do not seem like they come right off of paper…these women are real!

Mark A. Rhea’s direction is superb! The first act works to slowly build relationships, making you care about the characters that you are watching. This way, when the tragedy of the second act hits, you experience real emotion. Not only do you feel sadness, but also a bittersweet happiness as you watch these strong women find glimmers of hope and humor through their friendships.

The Keegan Theatre’s Steel Magnolias is truly an entertaining – and at times – heart-breaking production that I highly recommend. It’s theatre at its best!

Running time is 120 minutes, including a 15-minute intermission

Steel Magnolias plays through August 21st at The Keegan Theatre, at Church Street Theater – 1742 Church Street NW, in Washington, DC.  Purchase tickets by calling (703) 892-0202 or by ordering them online.

Running time is 120 minutes, including a 15-minute intermission