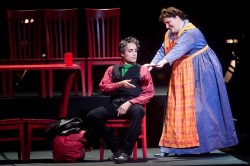 The singers, to their credit, have largely embraced the dramatic parlando style that Sondheim’s score requires – yet only truly shine in the show’s more lyrical passages. Some of the blame, surprisingly, must be apportioned to veteran Broadway conductor Larry Blank. Blank draws a lush, luxuriant sound from the National Symphony Orchestra and provides sensitive accompaniment to ballads like “Johanna” and “Pretty Women.” Yet Blank’s consistently slow tempos rob numbers, such as “The Worst Pies in London,” of the rhythmic vitality they need to make Sondheim’s jokes land. The show also feels musically underpowered and never fully captures the dramatic urgency of the score — a disappointing result given the potential of the massed forces of an opera company and a full symphony orchestra.

The production’s central problem, however, lies in the miscasting of its two lead roles: Sweeney Todd, the unjustly imprisoned barber who, thwarted in his attempt to avenge himself on the ruthless and lecherous Judge Turpin, vows to take vengeance on the entire world; and Mrs. Lovett, the garrulous, amoral and utterly practical pie-shop proprietress, who spots a lucrative business opportunity in her partner’s homicidal rage. For Sondheim not only makes fiendish technical but also formidable dramatic demands of his lead actors: they must dramatize, often in a single song, schizophrenic shifts in moods and the full mental and emotional range of lunatic minds in motion.

As Sweeney, Michael Anthony McGee reads far too young on stage to be credible as a middle-aged man who has spent the last fifteen years in prison. In McGee’s characterization, Sweeney’s seething anger and brooding, obsessive personality often come across as mere petulance. While possessing an appealing baritone, McGee lacks the gravitas and the depth in his lower register that lend Sweeney his dark charisma. McGee comes closest to capturing the full declamatory power of Sweeney in “Epiphany,” when he breaks down the fourth wall to direct his homicidal rage against the world. Yet McGee misses the depths of the keening, threnodic passages of the song, and we never fully understand that his quest for salvation through mass murder arises out of profound personal anguish.

McGee fares better, though, than his partner-in-crime Margaret Gawrysiak, who fails the first test of any good Mrs. Lovett: she is simply not funny. Gawrysiak lacks comic timing and attack, and her one-note, matronly characterization misses Mrs. Lovett’s glittering zaniness and essential mercurialness. The mezzo-soprano delivers her numbers with a pleasant tone and admirable diction, but she fails to generate any real chemistry with McGee or with the audience.

Two supporting performances also illustrate the “good singer/lackluster actor” dichotomy. As the young sailor Anthony, tenor Eric Barry delivers one of the evening’s musical highlights, a beautifully lyrical rendition of the Act I ballad “Johanna,” but his acting is comically oafish. Bass Kenneth Kellogg, as Judge Turpin, gives a richly sonorous vocal performance, yet in his Act I solo, he delivers perhaps the tamest self-flagellations ever witnessed on stage and misses the sadomasochistic perversity of the number.

Given the minimalism inherent in a semi-staged setting, Faircloth would have been better off fully embracing a more abstract storytelling language rather than retaining the outlines of a conventional staging. Alas, the show’s generic period costumes could have come straight from Oliver! Much publicized, the production’s cartoonish video projections deliver mixed results and only one truly potent image: a powerful representation of catharsis, as accumulated streaks of blood drain away from the screen with the show’s final murder.

What emerges, then, is a Sweeney that connects many of the musical dots but never quickens the pulse. This is a production that blunts the sharpest edges of the horror story and fails to thrill; it is the most bloodless Sweeney I have ever seen.

Running time: 2.5 hours with one intermission.