The Great Ben Egerman Theatre Adventure presents The Beasts, a one-man show starring (duh) Ben Egerman, which follows a meeting in a building that has been sealed off from the outside for generations. The discussion centers around whether or not they should open the door that leads into the unknown, and what horrors may be waiting for them if they do. 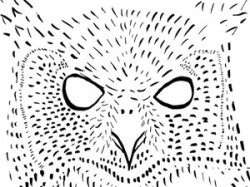 I have always been wary of solo shows from what I’ve seen in TV sitcoms, in the overdone episode that involves a quirky friend who has a solo show, and his or her friends reluctantly attend and are in-turn tortured for an hour. We’ve all seen it. This performance, however, was immensely entertaining. Using only a coat hanger that held items such as work coats and aprons, Egerman swiftly changes characters and portrays each one sublimely; from a worried housewife, wringing her hands, to a nerdy scientist that hunches around with jerky movements akin to a velociraptor. Egerman also uses puppets, which are in themselves entertaining and random, ranging from a monocle-wearing wolf head with a German accent, to a marionette that looks like a queer mixture between a sphynx cat and an undercooked chicken wing.

Watching someone transform from one drastic character to the next within seconds is truly fascinating, and the audience loved every second of it. Too impatient to save their excitement until the end, they decided instead to burst into applause between each of Egerman’s costume changes, followed by a standing ovation at the conclusion.

So, do they open the door into the unknown? Go and find out. You will not regret it.

The Beasts information and tickets.