This production of The Cherry Orchard, performed and staged by Quotidian Theatre Company, captures the frightening realism that Chekhov’s characters are made of. The story is about a family that loses their fortune and is forced to sell their home and property, which has belonged to the family for generations. Chekhov’s plays are all about acting; it is not about portraying characters as good or bad, but showing imperfections and attributes in all of them, making these characters real. The actors greatly fulfill the realism required for their role, every character violently evoking pity, laughter, and sympathy from the audience. At the end, it is hard to know whether to laugh or cry for these heart-breaking yet heart-warming characters. 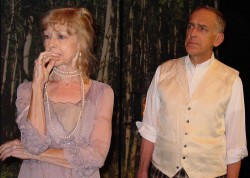 The stage is designed with simplicity in mind, a few paintings hanging on the walls, chairs on either side of the stage, and in the center a window displaying the cherry orchard outside. The costumes, designed by Stephanie Mumford, catch attention because they are quintessentially early Twentieth Century Russian attire, flower pattern shawls, black leather boots, and belts around the waist.

The focus is on the dialogue and on the characters, which the actors translated phenomenally. Director Jack Sbarbori receives outstanding performances from his superb cast.  Jane Squier Burns as Lyuba, John Decker as Leonid, Steve LaRocque as Lopakhin, and David Dubov as Semyon bring the show to life. These actors perfect the conflicting sides of their character’s personality; they repulse and delight the audience at the same time. Burns portrayal of the tragic Lyuba can bring many to tears, her pitiful story aches the heart and the performance throws her emotion in everyone’s face.

This mesmerizing production of The Cherry Orchard does justice to Chekhov’s genius. Do not miss it!

Running time:  2 hours and 30 minutes with one intermission.

The Cherry Orchard plays through August 7th at Quotidian Theatre Company at The Writer’s Center – 4508 Walsh Street, in Bethesda, MD. For tickets, call (301) 816-1023, or order them online.