The Complete World of Sports (Abridged), at The Kennedy Center

The World of Sports Is Not Just For Athletes Anymore…

The Reduced Shakespeare Company presents The Complete World of Sports (Abridged), a three-man show with actors Reed Martin, Matt Ripey, and Austin Tichenor. Do not be deceived, this show is not just for sports lovers. The performance speeds through the entire history of sports, including sports from every continent and from every era. The stage is their fictional sport channel RSCSN (Reduced Shakespeare Company Sports Channel). The show bears no dull minute and is stuffed with hilarity, intelligence, wit, and information. 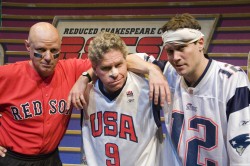 The set is modeled off a sports channel panel and the show is meant to resemble a television special, commercials included. The actors wear different sport jerseys and professional sports gear; for example when they discuss golf, their accents are Scottish and they are wearing plaid patterns and kilts. They change into different outfits so quickly that audience has barely any time to notice, while their use of props borders on lunacy because balls, bats, and heads are flying constantly making the crowd ask, do these guys ever get tired? If they do, they hide it well because there is not a second wasted in this show.

The jokes and stereotypes are endless; quips about our humble Redskins, the dullness of baseball (one of them cannot help but fall asleep when he hears the word), the known American disinterest in soccer, and a song (among others) listing the strange names of moderately known sports such as curling and quidditch (for the Harry Potter fans). These three experts of humor also display their genius through taboo subjects like steroid urine testing and literary one-liners such as “Ophelia failed her swimming trials.” The actors incorporate the audience into the show, pulling four or five of them onto the stage and asking several others to stand up, introducing them as famous athletes, and one older gentleman as Sigmund Freud.

Along with fantastically sharp humor, the show teaches the audience about sports though history and category. The timeline begins with the Greeks and Romans and continues through today, covering a range of sports from categories like “sports in a circle” and “who can beat up who?” The show builds up for the ridiculously amazing Olympish Games (Olympics-ish), which are described as “summer, winter, and junior all rolled into one”, and include a series of Michael Phelps jokes along with other Olympic athletes.

Do not waste any more time in the gym and go watch The Complete World of Sports to lose weight from belly laughs and gain endurance in the history of sports.