Thrilling, heady and mesmerizing, “Prelude to an Afternoon of a Faun” by Claude Debussy spins a story of gold before the play begins. A personal favorite of mine, this moving piece sets the stage for the complex story of love, betrayal and conflict arching to mythological proportions. The Sculptress, now playing at Fells Point Corner Theatre in Baltimore, MD, reveals the troublesome love affair between sculptress Camille Claudel, considered a “woman genius” and Auguste Rodin, the famous sculptor so well known for his spirited work. 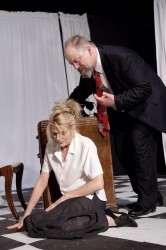 We learn the two synergistic souls met in Paris, France in the early 1880s. Their love was destined to stagnate under the shadowy complexity of Rodin’s long time relationship with Rose Beuret whom he was reluctant to leave. After an unwanted abortion, Camille, played robustly by Karin Rosnizeck, breaks off her romantic relationship with Rodin and sometime later begins to show the manifestations of paranoia and schizophrenia. After being “voluntarily” committed to the Montdevergues Asylum, at Montfavet by her brother, Paul, played with command by Stefan Aleksander, she finds herself imprisoned more by her brother’s selfish and relentless jealousy than by the asylum staff. It was clear that years of challenging family dysfunction in which children competed for their parents love and support had unraveled their sibling bonding.

Into the office of Paul Claudel comes Spanish artist, Remedios Varo, played with cool, staccato spontaneity by Yagmur Muftuoglu. Paul Claudel, having discovered his sister’s interest in Varo’s art, hires her to ease his sister’s deepening depression and his conscience. The women beget a true friendship that buoys them through the discoveries of infidelity and the ravages of WWI. Camille’s suppressed emotions are revealed in the telling of her love and loss of her precious cats which she was forced to leave behind when committed. Varo’s gifting of a stuffed cat appears to appease Camille after which she experiences a quickening of inspiration leading to a renewed interest in sculpting. Paul, hoping to derail the strengthening friendship between the two, becomes outraged when his orders to keep Varo away from his sister are ignored.

When asked about the role of Paul Claudel, actor Stefan Aleksander contrasted it with the wonderful childhood he enjoyed. What most intrigued him about the play was the ability of the script to “breathe,” my words not his. He insists that he loves most the lack of direct design in the script beautifully written by Marilyn Millstone and directed by Juliana Avery. “The actors,” he shared, “are free to layer their roles as they define and develop their characters.”

Camille’s death brings the story full circle. Claudel, clutching at the last pieces of Camille’s works of art, comes face to face with his own guilt and desertion of his sister when she needed him most.

Of special mention are those with smaller but no less important roles. The bridled passions of the asylum administrator, Genevieve Renat, a woman with her own clouded past, is played with deceptive stoicism by Ellie Nicholl. With her assistance, Camille is given unexpected freedoms.

Eve Carlson is so perfect in the roles of the young nun and the secretary that I can’t think of how she could possibly improve. She is given to humorous expressions and eyes that tell what others may have missed — the truth. David Shoemaker, who portrays three small but intriguing roles, is a master at creating instant intimacy when on stage. His lines delivered to Camille and Remedios were enhanced by his ease of movement within the space between himself and the other actors. In this production, accomplishing that is not an easy task because there are many scene changes. White curtained sections are regularly moved and opened to reveal black and white drawings. These add the look of an extended office in one scene and an entry hall in another.

Costuming felt true to the period. The hats and shoes in particular were very much what one would expect to have seen in Paris from 1935 through 1951. The solid blocks of black and white flooring are mirrored in the costumes and strike a dichotomy between the vulnerable and strong within each character’s life.

You must see this production! It is full and rich with irony and paradox and handled with brazen authority by each of the actors. Excellente’!

The Sculptress information and tickets.