The Wizard of Oz at Dutch Apple Dinner Theatre

Sparkle! Sizzle! Emerald Flash! “We’re off to see the Wizard, the wonderful Wizard of Oz.” If you are lucky enough to get tickets to the Dutch Apple Dinner Theatre’s production of The Wizard of Oz in Lancaster, PA, you will have more fun than a season of watching “Glee!” 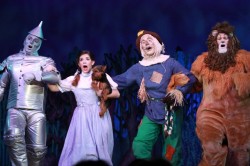 The show was my childhood playing out before me and it felt wonderful! The show opens with lights blazing. You immediately know you have been transported to a magical kingdom. You wonder also, if you have been transported to Broadway, where special effects, high quality costumes, professional make-up, wondrous sets and superior acting talent would be expected. But no, you are not in Kansas, you are in the lovely, lush green country-side of Dutch PA.

Let’s get started because you do not want to miss a minute of this. When the curtain opens, you see Auntie Em and Uncle Henry and the famous farmhouse you will remember from the 1939 film starring Judy Garland. The house is right there on stage. It could talk it’s so real. All of the characters you remember from the movie come into the scene – only live and better. Nothing is compromised. It’s as if these tanfabulous (tantalizing and fabulous!) characters from your childhood memory, Hunk & the Scarecrow, Hickory & the Tinman and Zeke & the Cowardly Lion have been in hibernation until the curtain lifts.

Well you all know the story..so let’s talk about performances. Dorothy is played believably and fantastically by Ashley Wieronski. I loved Cheyenne Nelson as Miss Gulch and the Wicked Witch. Cheyenne must have come directly from Actor’s Heaven. Her performance is outrageous! She becomes the characters she portrays and we believe all of her wicked charms will work. Auntie Em, played by Jennie Hollander, brings her character to life in a way that makes you remember the strength and love of the women in your family who held you in their arms and hearts and sheltered you from the scary things out in the wicked world.

John Ramsey, who plays both Hunk and the Scarecrow, is absolutely unforgettable as the flexible, nimble man of straw with a heart of gold. Christopher Russell as Hickory and the Tinman remains true to his physicality throughout the play and that takes talent. Great job! Jason Sofge as Zeke and the Cowardly Lion is a grumbling, bumbling mass of animal anxiety. Jason rocks and rolls his character and we love him! Then there was Toto. If ever there was an adorable dog, Toto played by 2 1/2 year-old Yorkie actor, Molly Carmen, is the finest! I understand several dogs were auditioned but only Molly passed the fog, music and singing test. She’s a local talent. The Wizard of Oz, is played humoursly and definingly by Micheal Weaver, who merely landed in Oz by way of a stray wind.

The show is so richly produced, you will be wide-eyed and bushy tailed throughout the entire event. You will notice from the first words uttered that the acting is stupendous. Where did they find these people! I’m sure somewhere several regional and national companies are looking for missing top star quality actors. I can tell them where they are. They’ve found their way to the Dutch Apple Dinner Theatre for this production of The Wizard of Oz.

But Hey! What’s a dinner-theater without food? The menu is colorful: Ham with pineapple, macaroni & cheese, chicken fingers, mashed potatoes, broccoli corn and the best tasting fish I’ve had in a while. Salads and a wide variety of desserts top the menu.

Just do yourselves a favor. I know you’ve seen the movie – several times with and without your children but you’ve never seen it like this! Thanks to Russell A. Thompson, we are intrigued by stars floating about the ceiling and bolts of colored lights in purples, greens and hot pinks cascading onto the marvelous sets. Add the artistry of Set Designer Dominic Lau and we are entertained by sequined talking trees, a standing hour glass and a magic screen that take us from Kansas to Oz. Great atmospheric audio from sound designer, Jacob Mishler and glorious musical direction by A. Scott Williams.

Under the excellent direction of Dean Sobon, actors and a terrific ensemble cast, The Wizard of Oz is made merry and bewitching on the stage of the Dutch Apple Dinner Theatre. Smashing!

The Wizard of Oz is playing through August 20th at the Dutch Apple Dinner Theater – 510 Centerville Road, in Lancaster, PA. Make your reservations here and look at production photos here.