While in Upstate New York, we decided to take in a performance of one of the most well-known good time, old-fashioned musicals in the American musical theatre canon- 42nd Street. The Merry-Go-Round Playhouse, in Auburn, New York, undertook this ambitious, large-scale production as part of its summer series. Under the roof, shaped like a Merry-Go-Round top, we were transported to a different time and place. Overall, we were most pleasantly surprised by the production and found it an enjoyable way to spend a summer evening.

Director and Choreographer Brett Smock did an excellent job of staying true to the original production, while scaling it down to fit the constraints of the performance space. Almost all of Gower Champion’s memorable original choreography remained intact and was fearlessly performed by a high-caliber cast of dancer-singers. The tap numbers, in particular, were of high quality, and the ensemble cast deserved special recognition for pulling them off. The audience wildly applauded their toe-tapping efforts. 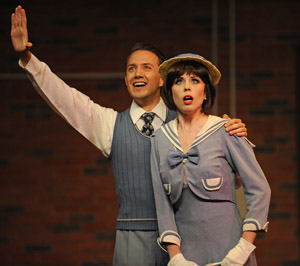 Zak Edwards is Billy and Julie Kavanagh is Peggy in the Merry-Go-Round’s production of “42nd Street. Photo provided by the theatre.

Musical Director Corinne Aquilina leveraged a 10 player orchestra, comprised of local and NYC-based talent, to its full advantage. Though the orchestra had fewer players than the original Broadway production and the most recent Broadway revival, understandably, the players met the task of making Philip J. Lang’s original orchestrations sound rich and full.

42nd Street requires a capable cast of actors, singers, and dancers. While the entire cast performed their roles admirably, there were several standouts. Rebecca Spencer expertly sung and acted the part of washed up star, Dorothy Brock. Her strong voice carried well throughout the theatre and she was able to convey great emotion during the quieter scenes, including those with Julie Kavanagh, who played Peggy Sawyer, the young starlet-to-be from Allentown, PA. Kavanagh danced and sang the part with great ease and had a certain charisma that made the audience want to go along on her journey and save the show, particularly in the 2nd act. Her innocent and honest take on the role was refreshing. Other notable performances included Zak Edwards as the tap dancing, dynamo tenor, Billy Lawlor.

Though there was no major weak link in the cast, although we felt that Christopher Carl’s acting choices in his portrayal of Julian Marsh, the producer, were less than ideal. This character is usually one of the most bombastic in the play, and Carl chose a kinder, gentler approach to the character. He was more of a father figure to Kavanagh’s Peggy Sawyer, than ruthless businessman who would stop at nothing to succeed. Nonetheless, his singing was quite strong, particularly during one of the iconic Harry Warren and Al Dubin songs, “Lullaby of Broadway.”

The sets and costumes by Czerton Lin and Travis Lope, respectively, also served the production well and added value. The functional sets made good use of the small space and clearly delineated both time and location. There was a wide array of costumes, many of which were were quality replicas of the original Broadway costumes, that appropriately evoked an era gone by.  The “show within a show” costumes, in particular, had all of the “glitz and glam” that one would expect in a big, Broadway-bound musical in the 1930s.