Fringe is done. Sad face. Each year I have a bit of post-partum depression after the Festival ends. Where else can you mingle with actors from all over the city and country who want to make something artistically worthwhile?  For three weeks everyone gets to be a real artist. They get to b***h about all the things that went wrong in production, rehearsal, and performance. Postcards and business cards exchange hands with such swiftness and precision that you’re forced to wonder how we avoided filling the lobby with the blood of those almost paper cut to death.  And the hierarchies that have been established throughout the year dissolve as artists come together for art’s sake. 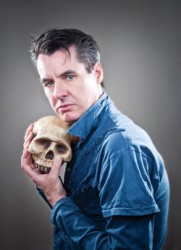 They say that even a cat can look at a king, and in this instance I (the proverbial cat  [usually I’m the proverbial b***h, but for the sake of this analogy let’s switch species] got a chance to actually speak with Christopher Henley (the king [again, not his typical royal title, but for the sake of the analogy…etc.]), the Artistic Director of Washington Shakespeare Company.

I talked with Christopher about how an established theater company fits into the world of Fringe. After all, isn’t the opposite of Fringe the established theater scene? Well, let’s look at that. Certainly there is a lot of mainstream theater in Washington. You see the same titles repeated in a cycle that takes about four years. You see the names of the shows that will get butts in seats and keep food on the table for artists and producers both. These names pop up like perennials in the manicured gardens of the DC stage. But next to them you have the rarities. Those vibrant anomalies that add texture and depth to those familiarly florid shows. The strange pieces of the craft that leave you with more questions that when you came in, or answer questions you hadn’t even thought to ask – those are the Fringe of theater. And that’s why I think more companies should endeavor to take part in Fringe.

Christopher talked to me about how he has been a part of the scene for many a year. He was, in fact, part of the first ever Source Festival in the 80’s. He continues his pursuit of the artistic endeavor with WSC as he rearranges and sculpts classic works into new art. It’s a path that started on the fringes of the scene, but wound its way into the heart of our community. He told me that he wanted to create a show that would be out of the bounds of commercial theater.  It’s wonderful that an established company can participate in a festival like this with truly fringey material (the name of the piece was Hotel F**k).  I imagine that reconnecting with his theatrical roots can do nothing but inspire him to continue to press the boundaries of his theater – in order to expand the boundaries of the people who witness his shows.

Here we come to the challenge. I would challenge the mainstream theaters in DC to find a way to incorporate the incredible energy, cascading spontaneity, and uncurbed creativity of the Fringe into their worlds. Allow yourself to be inspired by those around you and then jump into the white water rapids of combined consciousness- and head first with the rest of us. As you climb out and towel yourself off – remember the chaos that dissolved into beauty before your eyes. Bring that with you into the mainstream, as Christopher did, to broaden the horizons of your audience. As their horizons expand the geography of your art will expand with them. As the world you share grows larger the chances to push boundaries come ever more often and, before your eyes the horizon blossoms again. Then, as you ride off into the sunset that sits on that gargantuan horizon – you can survey all that land and know that next to no one could have ridden this far without you leading the way.