A Year in the Life of a High School Theatre Kid

The best part about being involved in theatre as a student is that you are constantly being introduced to new material. Most professional stage performers consider themselves lucky to find a job where they can play the same scenes and song-and-dance routines to an audience eight times a week over and over and over again. As a student, I have the privilege of participating in many different shows throughout the year.

Normally I consider myself a musical theater guy, but this year I had the opportunity to take part in my first non-musical, Magruder High School’s production of Moliere’s Scapino. The play is a classic Commedia dell’arte piece, following the trickery and wiles of the mischievous servant Scapino as he cons immature lovers and swindles foolish old men a la Bugs Bunny. I played the role of Octave, the archetype Innamorati, desperately in love with his girlfriend, and even more in love with himself. The show was a fun, new experience for me. Moliere’s book (though hilarious) was difficult to learn, and even harder to communicate to an audience consisting mainly of high school students. Most of the story telling was done through over dramatic movement and physical comedy, true to the original Commedia dell’arte style of the play. 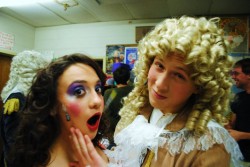 All year round I am a member of the Musical Theater Center’s performance ensemble Singular Sensations. We are a group of students aged 14-18 who perform Broadway song-and-dance numbers at venues ranging from senior homes and community festivals to the Kennedy Center and most recently an “Emerald Tour” of Ireland (think Glee!). This year my favorite numbers from our repertoire included songs from West Side Story, Les Miserables, and Next to Normal. I love how much new material we are exposed to and how quickly the group learns. It is normal that we will spend one rehearsal learning a number, and then not see it again until performance time.

In April, my school’s musical was Annie. While not my favorite musical, one could easily argue that it is the show that got me into theater in the first place. I used to love watching the film with my younger sister, and in the 6th grade, Daddy Warbucks was the first principle role I ever played. At that time I was a soprano and shorter than the little girl who played Annie, but of course it was still a big deal for me! This time around I played a slightly bigger, baritone Daddy Warbucks. What I find most unique about the Magruder Drama Club is how students are involved in nearly every aspect of the production. Lights, sound, costumes, makeup, painting and construction of scenery are all handled by students. The pit orchestra is also entirely composed of incredibly talented kids. For this show, I decided to join the club’s “Business Crew”. I assisted in the management of ticket sales and helped to find show sponsors, once again a totally new experience for me. 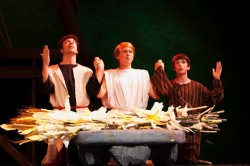 I most recently appeared on stage in MTC’s production of Children of Eden. Meeting and performing for Stephen Schwartz last year in The Stephen Schwartz Project, I learned that Eden is Schwartz’s favorite work of his own. I was thrilled to hear this, as Eden has always been one of my favorite musicals for its beautiful score, themes, and overall flexibility as a show, meaning there are so many different ways it can be done.  I have participated in three completely different productions of the show and this time I was truly honored to play the roles of Adam and Noah. Children of Eden is freely based on the first few books of Genesis, but most importantly it is a story of family and the passing of traits from generation to generation. This is why Adam is played by the same actor as Noah. Having previously played Abel and “Young Abel” (two different parts in the show) it was really cool for me to play Adam /Noah because I have now played a part from each “generation” in the show. To add even more to the familial themes of the Eden, this was the first time that I shared the stage with two of my younger sisters; ages 8 and 10 (and my third little sister, age 14, even helped out backstage). In the spirit of the show’s themes, I hope that I have passed my love for theater onto them. 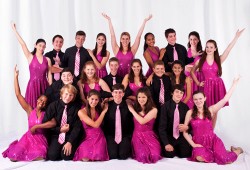 This coming year I plan to continue participating in Singular Sensations and the Magruder Drama Club. I’ll also be singing tenor in my school’s Chamber Choir, managing four AP classes, taking advanced tap and voice lessons, practicing piano and writing about other young actors and their performances in the MD/DC area for MD Theatre Guide.

Jonny Perl is a 16 year-old local actor who has appeared in many productions at Musical Theater Center and at Colonel Zadok A. Magruder High School. Roles include Noah and Adam in 'Children of Eden', Tevye in 'Fiddler on the Roof', and The Tin Man in 'The Wizard of Oz'. Jonny writes about young performers in his 'Teen Scene' column on Maryland Theatre Guide.