Alison Krauss and Union Station performed in front of a sold out crowd at Wolf Trap in Vienna, Virginia on Sunday, August 7, 2011. The opening act Dawes performed a well-received but brief 20 minute set. Dawes had a vintage electric folk rock feel with original modern songs. They are a band which deserves a longer listen.

Alison Krauss and her band Union Station was the reason Wolf Trap was sold out. Alison has 26 Grammy Awards on her resume. She has sung with some of the biggest names in music such as Robert Plant and Brad Paisley. Her band also features Jerry Douglas a highly regarded Dobro player who has won two Grammies for his solo work. 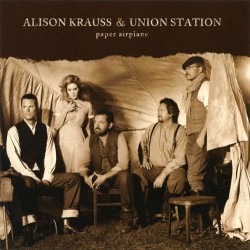 They performed most of their latest album Paper Airplane. Their set opened with the title track and the second song, “Dustbowl Children” which highlighted Dan Tyminski’s vocals. Perhaps one of the reasons Union Station is so good is because everyone in the band has an opportunity to shine. Dan shined on vocals and guitar throughout the night. Ron Block played the guitar and banjo. Barry Bales played the stand up bass and added his vocals. And of course, there is Alison shinning with her fiddle or her angelic voice.

Highlights throughout the night included the band finding the melody on the banjo, guitar, Dobro and mandolin at the same time – or just listening to Alison’s incredible voice. Jerry Douglas performed a couple of instrumental solo pieces on the Dobro in the middle of the show. He is regarded as one of the best players of the resonator guitar, called the Dobro and it would be hard to argue he is not among the best after hearing his pieces. Traditional bluegrass fans would not have been disappointed with their version of “Man of Constant Sorrow,” or the Peter Rowan penned tune:”Dustbowl Children.” Alison Krauss highlights for me included “Baby, Now That I found You” and “Let ME Touch You for A While.”

She saved the best for last. The encore included stripped down abbreviated versions of several songs. The encore included her hit “Nothing At All,” her duet with Brad Paisley “Whisky Lullaby” without Brad. It also featured an a cappella version of “Down to the River to Pray,” followed by “Your Long Journey” a song she performed with Robert Plant on Raising Sand, and the concert ended with her song “Reason for it All.”

Running time for the concert was about 2 hours 35 minutes with a brief break between the opening act and Alison Krauss.

Alison Krauss and Union Station have tour dates in support of Paper Airplane scheduled through November. Tour information can be found here.  Running time for the concert was about 2 hours 35 minutes with a brief break between the opening act and Alison Krauss.