An Interview with Robert L. Frank of Reisterstown Theatre Project

The Reisterstown Theatre Project  (‘RTP’) began in 2008 through a collaboration of creative minds in the area. The group has presented a variety shows ranging from Shakespeare to musicals to mysteries, putting on two to three shows a year. I caught up with RTP’s President Bob Frank to find out more about his active company, and his love for theatre. 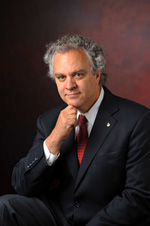 Teresa: When did you and your wife first get involved in RTP?

Bob: As  you said above – in 2008, RTP grew out of a desire to have year- round theater in Reisterstown available to all. It met the needs of the community and the desire of the recreation council to complement its great athletic programs with a first class theatrical company. Initially, Kathy McCrory, myself, my wife June Frank, Jerry Meyer and others gathered to talk about creating a theater company. The concept was rapidly embraced by the community and has grown nicely.

How do shows get chosen for production with RTP?

We choose our plays as a group. We get together and throw out show names and then put them to a vote. It is a fun process to go over a list of shows and then vote on what we like and what works. Usually you can see a consensus develop even before the formal vote.

What are some stand out favorites and why?

I like the shows that involve the whole community. Perhaps my favorite show in the last few years was Big River (okay, I am biased – I directed it!) because it is tells of the growth of a young boy with good music and a fun story. I also think Shakespeare’s Twelfth Night is a fun show. RTP did a show called Inspecting Carol which was about a struggling theater company trying to do A Christmas Carol.  Kathy McCrory directed it and it was hysterical.

My family and I saw Big River and really enjoyed it! RTP seems very much a team effort with your wife, June. Did the two of you meet through theater?

June and I did meet through theater. She is very talented and she acted her way right into my heart. I wish I could dance or sing one-tenth as well as she does!!!!!

I recently reviewed The Comedy of Errors, and I was really impressed with some of the talent. Tell us about how you find your actors and the RTP audition process.

Finding actors is a cooperative effort. We advertise locally and have folks just walk in. The director will contact friends of her or his (Richard Peck brought in some great people). And we have a cadre of folks like you who have been in RTP shows in the past and come out for new shows. It is great to have a cast (like the one we have for The Comedy of Errors with some veteran RTP actors, some new local folks and some new actors from around the state (one of the cast members comes from the DC area!)

What made this production of The Comedy of Errors different than other productions of this Shakespearean comedy?

First and foremost is that this is a really great cast. Second, the outdoor setting really focuses attention on the quality of the cast and the script, making Shakespeare’s words spring to life.

Which scene was the hardest to stage, and what your favorite scene in the show?

I think the answer to this is one and the same, the scene where the master is locked out of his house. The physicality of Dromios arguing through the locked door when no door exists – is just hysterical! All the actors in the scene make you believe there is a locked entrance when your eyes make it clear that there is no door at all!

What challenges did the space where the show is performed pose in staging the show, and what is the weirdest thing that has happened in that space?

The challenges in the outdoor space have been numerous but two come to mind. We have to work around the weather (too much wind, rain, etc.), and lighting the space is tricky. The lights get set up every night and have to be aimed after dark with the audience watching. You can pre-aim somewhat but the lights usually need tweaking to work.

Weird things that have happened? How about bats flying between the trees after dark? And how about our biggest audience for Much Ado About Nothing insisting that we finish the second act in the rain. The show started with a light drizzle. By intermission it was a steady rain so the director (Alan Dale, III) asked the audience if they wanted a refund. No one asked for a refund and other than four seniors (who understandably needed to get out of the weather) everyone stayed through the whole second act – despite a very steady (at times very heavy) downpour. The actors did a great job and the show was very well received. Outdoor theater is . . . unpredictable!

I have personally worked on one show with RTP – Oliver! In 2010. It was a family affair with my husband and daughters acting, as well. We had a wonderful experience. I recall that through rehearsal space issues, and snowstorms canceling rehearsals, you remained calm and confident. Is this an approach you take or does it come naturally?

I guess I am naturally an optimist but you have to remain calm. Theater is a process of making sense out of confusion. Actors start walking into a blank space with an unknown script and after six or eight weeks produce the magic of enchanting an audience and telling a story. With that as a background, staying upbeat and focused is essential. There is plenty of time to gripe and grouse outside the theater but the theater is a place for focus and fun. It is like a wonderful special place to close out all the angst of the world and just enjoy yourself with other very talented people.

What did you think about Denise Loukus’ unique costumes for The Comedy of Errors? Which one was your favorite?

Bob: I think the costumes brought life to the actors. I love the courtesan’s outfit, which is flashy, and her makeup makes it even more outlandish.

Teresa: I agree! Her look was a mash-up of ‘colonial courtesan meets Lady Gaga.’ It worked really well in adding another interesting dimension to the role. I also got a kick out of the officers in sunglasses and cowboy boots.

How did you get started in theater? Have you also acted and directed?

I got started in theater as a kid in school acting. Then, like a lot of folks, I took a long break until my son Michael tried out 14 years ago for the play Oliver and got cast as the lead! Not being a “drop-off” dad – I came to the rehearsals, got roped into helping out and have been involved ever since. During that time I have built sets, worked back stage managing kids, directed, done lights, sound and lots more! I have loved that my whole family acts together (all 6 of us were in Hello Dolly!) and you meet so many great folks.

What is the first play you saw and how did it affect you?

I am not sure what the first play I ever saw was but in 8th grade I tried out for Tom Sawyer and was cast as a singing Huck Finn.  From then on I was hooked. I also remember as a kid watching both my sisters act (my older sister was a great Mamie Okum in Lil’ Abner and my younger sister was the lead in How to Succeed in Business) and being so impressed by their singing and dancing talents.

What’s coming up at RTP?

RTP has a great season lined up with The Fantastiks this fall and The Music Mannext spring. We are honoring our local council people during the fall show for all the help they have given us and we are looking forward to that. We hope to continue to have regular meetings and are pleased to see so many people show up to help the theater grow. Part of that is continuing and growing our fall/spring connection with Franklin Middle and growing the summer show. We are looking into purchasing a permanent moveable stage for our summer shows, which would be a real plus. That would let us do ‘Shakespeare On Wheels’ which was a common event in Shakespeare’s time (they used two horse-drawn wagons, and we will update that concept a bit!). RTP seems to have developed a life of its own and it is great to see so many people involved.

Teresa: ‘Shakespeare On Wheels’ sounds like a wonderful concept! I look forward to it, next season’s shows, and June’s popcorn and apples (passed out during The Comedy of Errors) as well.

What do you want audiences to take with them when they leave The Comedy of Errors?

Lets hope they leave with an appreciation of the wit of Shakespeare and the levity that comes from seeing one of his best comedies well done. Sometimes Shakespeare’s plays are ponderous and almost unintelligible  In my opinion, this casts makes The Comedy of Errors something that can be appreciated for its word, understood from its physicality (or, more accurately, the physicality these wonderful actors bring to it), and is a real treat for all ages.