BUMP: A Tabloid Story at Theatre Project in Baltimore, MD

The worshipped icons of our age are on TV and tabloid covers. When nobility is no longer a part of the equation, and mere physical beauty and wealth bring enough notoriety to a personage to attract hero worship, the quality of our heroes becomes questionable. That is to say, Paris Hilton, Anna Nicole Smith, and Lindsay Lohan might not have worthily earned their followings, but followings they do have. 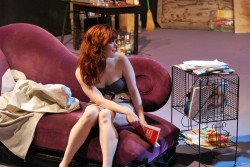 Rebecca Ellis, as Deena in BUMP: a Tabloid.

Deena Demeter, the hero of BUMP: A Tabloid Story, is something of a Lohan/Hilton hybrid of a billionaire’s daughter ex-porn star in a post-taste world. Named for the Greek goddess of the harvest and fertility, she is revealed to have just had a hysterectomy and is thus literally the opposite of her namesake. But goddess she is, as the young followers emerge early in the play, and two quickly rise to become members of her entourage. She has just been released from prison and has just been returned, tagged and attention-starved, to the wilds of her old playgirl Los Angeles life.

Her reason for being is now to get back on the covers of the tabloids. She is as hungry for powerful mind and mood-altering drugs as Hunter S. Thompson in Fear and Loathing in Las Vegas and as in tune with popular taste or human gentility as Divine in John Waters’ Pink Flamingos.

In fact, Robert Powers, a recent Johns Hopkins graduate, in writing this piece of grotesquerie with every intention of offending as many people as possible, has succeeded in strongly conjuring both the flavor and the weird wit of John Waters at the peak of his revolutionary tastelessness in his classic 70s films. In the preshow speech, director Jim Knipple warns the audience of this rather pointedly. This show is about being offensive. It is about exploring what worst darknesses might be imagined in the life on a pop-antihero like Deena. A sensitive ear or eye or a  sympathetic heart will definitely be put through the wringer in this audience: be warned, warned, warned.

Also reminiscent of Terry Gilliam’s mind-bogglingly hallucinatory Fear and Loathing film adaptation, though, is the show’s slap-happy levity in the embrace of these revolting acts. Keeping its satire strong and its shocks steady, BUMP succeeds far better in keeping the faith alive for the funny disgusts parade than for anything approaching a suspension of disbelief.

All of the actors, though, except for the very strong lead, Rebecca Ellis, as Deena, tend to appear either tentative or far too pointed with their material at times, slipping from just another monster to Deena’s doormat with too much ease. Admittedly, they are all still impressively game with this rough material, and Ellis impressively maintains a trashy confidence and a creepily charming presence not too dissimilar to good old Lindsay Lohan’s. Down to that crack in voice and her good looking girl next door charm, Ellis ranges her movie star looks through the whole Lohan diva spectrum, from cute and dimpled manipulative leers to ferocious insistence on the rules for being her friend. (*These include: 1. No one can look better than her. 2. Never ask her for advice about anything.)

Deena’s entourage is the entirety of the rest of the cast, and though they provide her the assistance and adoration she seems to require, all having their own needs and parasitic qualities all their own, each of these characters is poisoned by the insensitivity and utter selfishness of the lifestyle she loves. As they stay in her orbit, they all tend further toward disaster.

The structure of the play recalls sit-com, but with the focus on celebrity, it is something of a combination of Entourage and The Anna Nicole Smith Show. A major portion of the dialogue in the show is devoted to the abuse of drugs and making jokes about the lives they’re living. As with celebrity reality TV, the idea is to enjoy the presence of these people, peering into their own lives, rank and awful though they are.

The entourage consists of Billy (Mardee Bennett) and Scott (Ben Hoover), a twenty-something gay couple that are married to each other but freed to explore the bodies of other celebrities, and Lizzy (Grace Gordon) and Lauren (Emily Sucher), a pair of very young girls in awe of Deena, both claiming to be 18 at first, but who are clearly not, and are glad to do whatever they can to stay in her presence.

Photography is thematic here, and the lighting occasionally punctuates scenes with the flash of a camera. Melissa Martinez’s lighting is smart, to allow for a set that never requires changing, with different corners of the stage and a simple set piece therein representing different locales. Though it contains multiple locations, the primary one being a coffeehouse Deena takes over for a kind of home base for her campaign to return to tabloid stardom, Ryan Hasse’s set is at once a kind of large artist’s studio with paintings in every corner. This is a little strange and ironic, as the creativity of these people is vacant, but adding to that the usage of projections on the back wall of the stage for some presentations of Deena’s idiotic campaign for more attention, the stage does tend to feel like a rather complete nightmare world, come its conclusion.

As the show winds down, digging itself ever deeper towards the most repugnant of acts, inevitably, a most horrifying finale ensues. While the show does earn its offenses, do not expect too much to enjoy the play itself. While funny, it is a dark and sickly thing. Do not expect redemption. The shock’s the thing!

BUMP: A Tabloid Story plays Friday and Saturday August 26th and 27th at 8 PM and Sunday, August 28th at 3 PM- at Baltimore Theatre Project – 45 West Preston Street, in Baltimore, MD. Tickets can be purchased online or at the door.