Set in 1940s Los Angeles, City Of Angels is a double plot musical about a screenplay writer, and the noir Hollywood film he is writing. Stine, the writer, is typing up his story – as it is happening – on one side of the stage while the plot of the Hollywood movie is staged on the other side. This production is a quick-witted dramedy that carries the audience to a world of deception, sex, and murder.

The stage, music, and costumes provide a 1940s Hollywood feel, twisting together seamlessly within the two stories. A unique stage set-up immediately catches the eye as the show begins. On one side of the stage is the “real” life plot, and it is set in color, while the other side is the movie within the play, which is in black and white. The separation creates an interesting contrast (there is a bedroom and an office on either side of the age) between the two intertwining plots, and an original backdrop for musical performances. 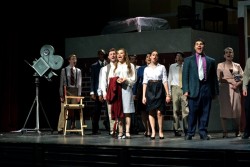 Cast of 'City of Angels' singing "I'm Nothing Without You." Photo by James Pash.

A live orchestra compliments the movie scenes with sultry and mysterious finger snapping music, characteristic of the music in 1940s film noir. The costumes are also classic 1940s: fedora hats that dip over one eye, secretaries bustling at work in pencil skirts, and gangsters in black suits.

Along with the music and design, there are several noteworthy scenes and performances that penetrate both world spectrums. As Stine, played by Alex Garretson, frantically keys his typewriter, he is unsatisfied with what he has written, and rewrites the movie scene as it is happening on the other side of the stage. Repeats of the same scene are revealed to the audience – with dialogue slightly changing each time Stine comically rewrites his frustration.

Amy Broadbent, as Gabby, and Kristina Friedgen, as Oolie, give an exciting performance of one of the songs “What You Don’t Know About Women”, and both actresses are fantastic vocalists. Their characters are in separate plots, on opposite sides of the stage, and supply one of the few scenes that show both worlds at the same time. Whether in fiction or in real life, it seems that men misunderstand women no matter what world they live in.

It was shame that despite laugh-out-loud scenes and striking performances, the microphones kept crackling and turning on and off. I felt sorry for the talented performers.

Funny, seductive and filled with enthralling performances, City of Angels is a splendid show that flirts with crime and comedy. The songs are catchy and enjoyable, the acting is interesting, and the double plot provides twice the fun and entertainment. Even if you’ve been to L.A, City of Angels will take you on a trip back in time in Hollywood that will bring you to the time when its thirst for fame and fortune began.

Running time: 2 hours and 15 minutes plus an intermission.