Turn of The Century Comedy For The Modern Fan
Gilbert and Sullivan, classic masters of musical comedy, have created hilarious shows that beat the test of time, but none are funnier than HMS Pinafore or The Lass That Loved A Sailor. A joint collaboration by the GLBT Arts Consortium and the Capitol Hill Arts Workshop brought the side splitting stage production to life with true community theater charm – here named DHS Pinafore (As in the Department of Homeland Security). 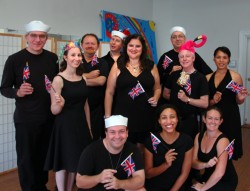 The cast of 'DHS Pinafore.'

Directed and choreographed by Peter DiMuro, DHS Pinafore is a comical treat for any fan of uncontrollable laughter. Staged in a community space, both Costume Designer Joan Biella and Set Designer Kent Gay took the feel of small, local theater and played with what they had. The colorful and fun set matched the quirky and creative costumes, and even featured some of the craziest hats ever seen on stage. Music direction by Barbara Schelstrate completed the show and Michael Arichea, a flutist fluent in both flair and comedy, stood out from the amazing orchestra with his unbelievable high notes.

Captain Corcoran (an all out hysterical performance by Kerry Jones) has plans to marry his daughter off to Sir Joseph Porter (a comical and slick tongued Rick Mauery), but Josephine (a stunning vocal performance by Jennifer Weingartner) has other plans. Ralph Rickstraw (Tom Michalisko) as the perfect hilarious hero with a unique voice) woos the Captain’s daughter and with the help of the gypsy Buttercup (and equally angelic and sultry Lisa Cobham), and a energetic ensemble cast. The gloomy Dick Deadeye (successfully quirky and funny John Bohman) and Cousin Hebe (vocal treasure and comical gem Sarah Markovits) round out the misfit cast.

Weingartner’s voice shook the rafters and brought the audience to the edge of their seats with ‘Sorry her lot’ and “The hours creep on apace.” The ensemble cast expertly charged through Gilbert and Sullivan’s chuckle inducing songs, but really showed off for “Sir Joseph’s barge is seen” “A British tar,” and “Can I survive this overbearing”. Tom Michalisko won the audience over with his performance of “A maiden fair to see,” and Cobham controlled the audiences heart strings when she sang “A many years ago”.

Sail away to The Capitol Hill Arts Workshop for lots of puns and fun!

Running time: 2 hours including an intermission.