It’s so exciting that for the first time in its 22 year history, Signature Theatre is presenting two world premiere musicals – The Boy Detective Fails and The Hollow – which will be presented in rotating repertory, in full production in an eight-week run.

In the next few days, I wil be posting interviews with The Hollow’s Matt Conner who wrote the music and lyrics, Hunter Foster who wrote the book, and with Stephen Gregory Smith, who is starring as Billy in The Boy Detective Fails. 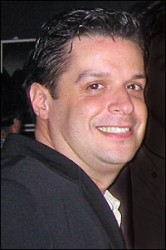 Joel: What was it about The Boy Detective Fails that made you want to come back to Signature and direct it?

Joe: Well, I’ve never really seen a world like it on stage. Joe and Adam have created a wonderfully quirky and distinct world inhabited by very specific and very human characters.

What is your vision for the show and how have your designers brought this vision to life on the stage?

Well, the script dictated that we had to be pretty inventive. The show takes place in a town where things are disappearing. While rooted in reality, the world of the play is just a bit off. I’ve always seen the piece as a kind of quirky haunted Grovers Corners from Our Town, so we’ve sort of put this miniaturized town on stage. The show has many locations so we needed to find a very theatrical way to do that.

Have you worked with Adam Gwon before, and how would you describe his score for the show?

We’ve never done a full production together but I’ve directed a number of readings of shows of his. I’m directing a production of his piece Ordinary Days in Philadelphia this Fall, and we’re actually writing a show together.

What’s your favorite song in the show?

Oh, I love the entire score, so it’s hard to pick just one. The song” Little Mysteries” perfectly encapsulates so much of what the show is about – so that is a special one for me.

What advice and suggestions did you give Stephen Gregory Smith and Anika Larsen on playing Billy and Penny?

Well, they’re both perfectly cast, so it’s been wonderful and a pretty easy process. Stephen just connects with the part in such a primal way. I’ve had to say very little to him. It’s an incredibly detailed performance. And Anika just connects with Penny in a very real way. Her emotional understanding of the role is astounding.

What do you admire the most about their performances?

Their honesty. Both characters are pretty “quirky” and extreme but they’ve found the humanity in the parts. They’ve created very real people even though the characters’ circumstances are extreme.

Were you familiar with Joe Meno’s novel before you took agreed to direct the show? How different and/or similar is Joe’s adaptation?

I had not read the novel when I was asked to direct the reading of the show two summers ago. Joe and Adam have done an extraordinary adaptation. Joe’s novel is so, so rich. Of course there are many characters and tons of incidents in the novel that just couldn’t end up in the show because of length. But they have kept the spirit and the heart and soul of the novel intact. And both Joe and Adam hav been amazing to work with. I’m not sure I’ve worked with two more collaborative people. They are not precious about their work. They want to do what’s best for the show – even if that means cutting things in the script that they love.

What scenes have been the most challenging to direct?

The whole piece is challenging. Extraordinary things happen in the shows. There are a lot of locations and some very cinematic moments that we had to find a way to find a theatrical equivalent for. The opening alone is almost 15 minutes long. It’s been a joy to stage. And choreographer Karma Camp has done amazing work as well.

What scene is your favorite?

There are so many. But I love the opening sequence. Again, it is epic – 15 minutes long – and it was just a lot of fun to figure it out. It sets up the entire world of the piece and covers a good deal of the history of Billy when he was a child detective.

What themes in the show are most important to you?

I love the idea that sometimes you should just embrace the mysteries of life. Not every question can be answered. There is a beauty in that. And I love that it shows how people can overcome loss and move out of loneliness by daring to let someone in.

What has been the most fun about working on this production?

Well the writing is just amazing and I love the cast, many whom I’ve worked with before. They’re amazing to work with and just all around good people.

Why does The Boy Detective Fails have the potential to be a big musical hit?

Well, as I said earlier it’s just such an unusual unique world that I have never really seen on stage before. It’s very, very funny and so touching and moving as well. It runs the gamut.

What do you want audiences to take with them after seeing The Boy Detective Fails?

I hope they will embrace looking at the world with a new sense of wonder.

The Boy Detective Fails plays from August 25th to October 16th, at Signature Theatre -4200 Campbell Avenue, in Arlington, VA. View the performance schedule, watch a preview video, meet the cast, and purchase tickets online. You can also order your tickets by calling the box office at (703) 820-9771.