I loved reading Sholem Aleichem stories when I was a wee child shivering in frozen Siberia-like Buffalo, New York. His funny and silly characters warmed my heart and made me laugh out loud. I still grab that volume of his short stories whenever I get the blues – and it never fails that his stories always bring a smile to my face and make me laugh myself silly. Oy what fun! 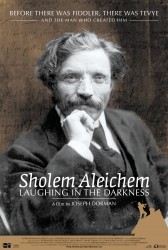 Recently, I had a chance to see Sholem Aleichem: Laughing in the Darkness  – a fascinating 93 minute documentary about the life and writings of ‘The Jewish Mark Twain.’ I asked Director/Writer/Producer Joseph Dorman to talk about making this film and Sholem Aleichem’s lesser-known writings.

Joel: Joseph, why make a documentary of Sholem Aleichem now in 2011? Why re-introduce him to older and younger generations today? How can younger audiences relate to this man?

Joseph: Sholem Aleichem has suffered a curious fate as a writer. Because of Fiddler on the Roof and his own enormous success during his lifetime, his name is known by many Jews and non-Jews alike. And yet the man himself and his stories are little known today outside small but devoted circles.

Why re-introduce him today? The simplest answer is because he was a great writer – and no great writer should go unknown. Beyond that, his stories tell a universal theme: the journey of a people from a traditional to a modern world, from a life bounded by tradition and religious observance to one largely secular and in constant flux. Sholem Aleichem may have written about Jews, but the journey itself is hardly exclusive. Its one all people take sooner or later and that’s why Fiddler has been such an international hit. Today, a Sholem Aleichem research center is being set up in Shanghai! Not as unlikely as it appears, if you think that millions of Chinese are now moving from small towns to large cities much like Jews were doing in the 19th century. And the fact is that the journey never ceases because our world continues to change and we, like Tevye the Dairyman, must all continually cope with those changes as best we can.

Joel: Most people who know Sholem Aleichem only through Fiddler on the Roof, would be surprised that he was a prolific writer. What kinds of work did he produce besides the Tevye stories?

Sholem Aleichem’s best work came in the short story form. More than this, he loved to write monologues. His most famous works apart from the Tevye stories are those of Menachem Mendl, a man who comes up with a hundred get-rich-quick schemes – each one ending in a greater and more hilarious disaster than the one before – and the stories of Motl the Cantor’s Son which tells of the epic emigration of Jews from Eastern Europe to America – through the very funny and perceptive eyes of a young boy. 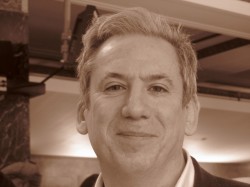 For a part of his life Sholem Aleichem was not a poor man. How did this man of ‘means’ write about Shtetl life and the poor so realistically. What experiences in his life did he bring to writing these works?

Actually, despite his brief period of wealth, which he inherited from his father-in-law and lost on the stock exchange and his own enormous success as a writer, Sholem Aleichem struggled financially for most of his life. He was a terrible businessman with a larger family to support. So despite the fact that he was an urban sophisticate writing about the poor of the shtetl, he  understood all too well the struggle to survive. And there was also, of course, the crashing blow of his youth when his father once successful, suddenly lost his wealth and his family became impoverished. That memory was seared into his mind, I think.

Take us on the journey of funding, researching, writing, and directing Sholem Aleichem: Laughing in the Darkness.

Perhaps my worst skill is raising money! That’s why it took me 10 years to make the film. The one upside of this is that I had the time to really live with the material. Though I’m by no means a scholar, it was a constant process of reading and re-reading the stories, researching the era and his work and delving into the photo and film archives. In the end, you feel as if you’ve had  a chance to live in another world for a bit of time. And that’s why I think one does this kind of work.

When were you first introduced to Sholem Aleichem? What were your first impressions of his work, and how has that impression changed over the years?

What did you learn about Sholem Aleichem that you didn’t know before filming?

Everything! Like many people, I thought he was a dusty, minor humorist hardly of interest to someone like myself. Of course, we live to be humbled! And I discovered a great and sophisticated modern writer, an equal of Chekhov or Bellow or Roth, who I had much to learn from.

You use hundreds (I assume) of still pictures in the film and some home movies and other film clips. Where did you find them? Do you have an exact count of how many pictures you use? Are there other films that you tried to get but couldn’t find?

There are about 300 photos in the film. Most came from the remarkable archives of the YIVO Institute in New York, which is dedicated to the study, and preservation of East European Jewish culture. Much of the archival film footage also comes from YIVO. And there were a number of other archives as well. It’s always a roller coaster process; one filled with great highs when you find exciting material and periods of abject frustration when the photo you desperately need eludes you. For the 300 photos in the film, there must be fifty or a hundred more I wish I could have included.

I can only imagine the difficult task of editing this film. What was the process Aaron Kuhn, Ken Levis and Amanda Zinoman used to edit the film, how long did it take, and what was your role in the editing process?

Had I had steady funding I would only have worked with a single editor.  But having said that, each of them are great editors and each added something of their own to the film – so I can’t imagine it without each of their contributions. I got the film to what is called the ‘assembly stage’ myself. That is, I created a baggy but core structure for how I saw the film’s narrative. Then came the hard work!  And that meant working very closely with each of them to deepen the narrative, flesh out the stories we used, and give the film a strong pace. There are all those dreams you have for the film, all the things you want to put in it, and there is that moment toward the end of the process where you need to create a coherent and watchable film.

Bel Kauffmann plays an important role in the film. Who is she and why is her presence so important to telling the story about Sholem Aleichem.

Bel Kaufman is a remarkable woman. She turned 100 this year! But that’s  really the least of her accomplishments. She’s the granddaughter of Sholem Aleichem and the last living person to have actually known him. She was five  when he died.  She’s been a great, great ambassador for her grandfather. She’s also a wonderful writer in her own right and the author of the massive bestseller, Up the Down Staircase.

Sholem Aleichem was a singular figure, a man; the critic Irving Howe called a ‘culture hero.’ His stories reflected so powerfully the lives of his readers, who were not illiterate but largely uneducated that he developed quite a remarkable relationship with them. It was a far stronger bond than one normally has with even a great writer. That was enough to bring people by the thousands to his funeral. And then there was that extra fact that, for American Jews, he had come to represent the Old World and the parents they had left and would never see again. His funeral became a chance for a powerful and final goodbye. 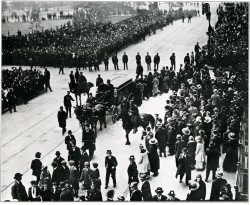 Where will the film be shown? Are you targeting certain cities?

The film premiered in the New York area and has just opened in Los Angeles. I’m self-distributing with the help of International Film Circuit so we started small. But the film has been well received by audiences and critics and we’re expanding as quickly as we can across the country to cities large and small.

Will you be attending the DC showing and offering a talkback with the audience?

I’m excited to be coming to the Washington D.C. premiere at the West End Theater. I’ll be doing Q&A’s after the 7:20 shows on Friday and Saturday and introducing the 9:15 show each of those nights as well.

What do you want audiences to take with them after seeing Sholem Aleichem: Laughing in the Darkness?

First and foremost I hope they’ll be intrigued enough to go back and read Sholem Aleichem. If they do, I’ll consider the bulk of my job done. I also hope they learn about a world that’s been largely obscured by time and the accidents of history. It was an era on the cusp of the modern world in which we all now live. To be modern means to live with the ambiguities and contradictions of identity, all those multiplicities and hyphenates – Jewish- American, Italian-American, Vietnamese or African American – that we embrace but that also serve to confuse and divide us, not only from one another but from ourselves at times. Sholem Aleichem was not about solving those ambiguities and contradictions; he was about learning to live with them while laughing along the way.

Did I mention that he was a very funny man?

Sholem Aleichem: Laughing in the Darkness begins August 12th at West End Cinema – 2301 M Street, NW (between M and N Streets). Purchase your tickets online or at the theatre.

Director Joseph Dorman will participate in a Q&A following the 7:30 PM screenings on August 12th and 13th.