Joseph and the Amazing Technicolor Dreamcoat at The Drama Learning Center

A few years before Andrew Lloyd Webber composed the world’s greatest rock musical Jesus Christ Superstar, and many years before his darkly spectacular hit The Phantom of the Opera, he wrote Joseph as a simple pop oratorio for a private school ensemble. In recent decades, big budget touring productions have turned this endearing little show into a big tacky mess, complete with a techno-style “Joseph Megamix” curtain call. Thank goodness that Director Jason Kimmell and The Drama Learning Center of Columbia have finally given Joseph the type of production it deserves: a humble staging, reminiscent of any church Sunday school pageant, with a cast full of talent and personality. 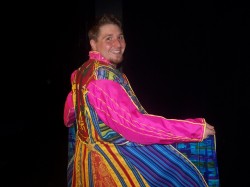 Joseph and the Amazing Technicolor Dreamcoat is based on the Biblical story of Joseph, the clairvoyant son of Jacob who is sold into slavery by his jealous brothers, only to rise to power as the Pharaoh’s trusted advisor. Kimmell has assembled a cast of all ages and levels of experience to bring this beloved story to life.

On the experienced side of the cast, the silver-voiced Kelly Ann Nealon leads the ensemble as the Narrator. She carries the show with her charisma and a beautiful vocal performance. Chad Ryan Novak makes a teddy bear-like Joseph; he makes a compelling transition from a perky favorite son who anyone might want to send up the river, to the mature rock-star leader who teaches his brothers a lesson in compassion. Kory Twit is amusing as Jacob and the snooty Potiphar.

The experienced pros are no match for 8th Grader Jake Foster as Judah, however, who steals the show countless times with clever interjections. The small children’s choir sings and dances with such presence and conviction that they must be mentioned by name: Elizabeth Feuerbach, Olivia Goodney, Aron Hinton, Kirsten Jolly, Lyanne Melendez, Teddy Yu, and William Zellhofer.

Kimmell really finds the fun in Joseph, and he laces the show with improvisational touches. For instance, when Potiphar fails to let out a sufficiently “mighty roar,” the Narrator stops the music to go back and give him a second chance (doubly funny to me because this is the most challenging phrase the Narrator sings in the entire score, and this reviewer happens to be a director who once forced many young Narrator-hopefuls to belt the phrase in a callback audition – a phrase which Nealon could have easily repeated four or five more times without breaking a sweat, I might add). Kimmel also dispenses with the Elvis tradition to make his Pharaoh a more contemporary rocker (played with cheesy charm by Eric Hufford), which works up to the point that “Song of the King” so clearly mimics the style of The King.

Music Director Juliana Marin draws enormous, full vocal harmonies out of her large ensemble. If this show lacks production value compared to the glitzy touring productions, it more than makes up for lavish sets and costumes with glorious choral sound – which, when all is said and done, is really all that any good production of Joseph ever needs.