Last night I had the opportunity to see Naomi Lizuka’s Language of Angels presented by the Bowie Community Theatre at the newly remodeled Bowie Playhouse, which is a lovely playhouse located in a beautiful setting inside White Marsh Park. If you have never been to White Marsh Park, you are in for a treat. The park is picturesque. 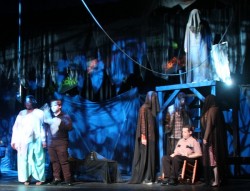 From left to right: Shanice Jones as Celie, Gary Small as Celie's Shadow, and Dann Alagna as JB. The others are 'spirits.' Photo by Connie Carter.

This is the first production of BCT’s forty-fifth season. Really, how many community theaters in the U.S. have been in existence for forty-five years? BCT is surely doing something right, and one of those things includes donating to a worthy cause. You see, in honor of playwright Lizuka’s Japanese heritage, the theater donated all of the proceeds of ‘Opening Night’ to Global Giving, a Washington DC-based relief organization dedicated to helping victims of the devastating Japanese tsunami. Kudos to BCT for making such a heart-felt gesture.

Language of Angels is a ghostly tale about Celie, a young girl, who disappeared in a cave in a North Carolinian rural town, and how it leads to the forever haunting and tragic fates of nine friends, with one friend being responsible for her disappearance and ultimate death.

Language of Angels could be characterized as a Noh play with a Rashomon-like story. Noh Theater is an ancient Japanese dramatic form, which typically focuses on the retelling of an actual event, with a central character overcome by one dominating emotion. A Rashomon-like story features the recollections of a story from characters with different points of view. What we have then in Language of Angels is an ancient, non-linear plot structure, set in the back woods of Appalachia, personified by soulful despair and anguish, and the voices of angels.

The ensemble of actors worked beautifully together in this difficult play. It was clear that they enjoyed working together. As a whole, though, the company could have used more time with accent coach Jo Sullivan. Their Southern/Appalachian accents were not consistent. The ensemble included Ben Brunnschweiler as Seth, Shanice Jones as Celie; Gary Small as Celie’s Shadow, Samantha Alagna as Kendra; Dan Alagna as JB; Chris Schenk as Michael; Bridget Arvidson as Allison, Kaeti Bradley as Danielle; and Justin Truesdale as Billy.

Terry Averill was both director & set designer of the show, and I must say, I was very impressed with Averill’s set. It was a haunting, nightmarish dreamscape. Directorially, the show was very rehearsed and polished, and competently blocked and paced. However, my biggest problem was with the acting direction.  I wish that Averill would have push them to the raw, emotional edges needed for this production. For example, the opening had the potential to take the audience into a fearful, haunting world that builds to an incredible emotional intensity. It’s all there, but actor Brunnschweiler did not find the intensity, clearly a directorial issue. In the interaction between Billy, Michael, and Danielle, there was much room for an intense, biting conflict between these three actors, but their work together was not inspiring. Billy’s character is living on an emotional and volatile edge.Truesdale never found  his state of raw, primal, emotional intensity. And Schenk as Michael seemed lost at times.

Technically speaking, Lighting Design, complete with haunting shadows, was artistically designed by Garrett Hyde. His lighting was a very essential part of the production.

The Sound Design by Kevin Garrett was surely innovative and helped with pacing and transitions. The sound was too loud at times and therefore distracting. I also felt that there should have been speakers in the audience as well. In a real sense, the audience was removed from the sound. We were only watching the sound not experiencing it. I truly wanted to feel the shrills and eeriness of it all. I wanted to be scared and spooked.

Finally, the costumes designed by Jane Lecher, most definitely enhanced the production. Lecher’s spooky costumes would enliven any Halloween party, and her character costumes gave a sense of reality to the rural town milieu.

Language of Angels will make you think and think some more. Playwright Lizuka is a playwright that should be read and seen. She has a very special voice that needs to be heard. I commend Bowie Community Theatre for tackling such a creative endeavor, just watch out for the spook-a-roos, they are hiding in the darkness.

Running Time: About 75 minutes without intermission.