Bob Anthony, born Robert Honeygosky, local critic and editor for the theatre/arts website AllArtsReview4U passed away from respiratory failure on August 20, 2011, in Hospice Care after a three-week stay at George Washington University Hospital, according to his nephew Dan McNew. He was 79 years old. 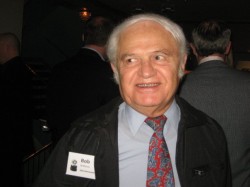 Bob Anthony was born June 7, 1932, in Clairdon, PA. As an undergraduate, he attended the University of Pittsburgh. After studying Theatre Arts and graduating from the University of Pittsburgh, he appeared with Fred Rogers, on Mr. Rogers’ Neighborhood, where he played several small roles. According to McNew, Bob was a close friend with Emmy Award-winning actress Jean Stapleton, better known as Edith Bunker on All in the Family – where they were regular attendees of The Pittsburgh Playhouse. Bob visited Totem Pole Playhouse, in Fayetteville, PA, where Ms. Stapleton performed in many summer stock shows that were directed by her husband William Putch.

His greatest role that he was most proud of was appearing as ‘Prince Charming’ alongside his Great Niece Camden. “When Camden was 4-years old,” McNew said, “She would call her uncle on the phone and he would always re-assume the role of Prince Charming.”

Bob moved to DC in 1969, and worked with patients at Howard University Hospital for 30 years where, according to McNew, he taught patients how to ‘talk.’ Then Bob moved to radio where he hosted a jazz show for 15 years at UDC’s Jazz 90 until UDC shut down their radio station.

Bob’s bio on AllArtsReview4U reads: “Bob Anthony-over 60 years in theater and the arts as a student, professor, radio critic, arts critic and world-traveled arts critic with international readers of reviews.” The man ate and breathed the arts – all the arts!

Bob was also a world traveler. He  had won the lottery – and a slew of coins at Atlantic City shortly thereafter, and it allowed him to travel all over the world and see places he always wanted to see. Wherever he went, Bob made time to attend and review theatre, opera, dance, concerts and movies. He was passionate about writing reviews about everything he saw, and he was very prolific.

I developed a friendship with Bob Anthony six years ago when I began writing my Theatre Schmooze column for DC Theatre Scene, and before I  began to record podcasts and interview actors, directors, and composers in the DC, Philly, and NYC areas, and because I knew that Bob had been on the radio for several years and had been a very good interviewer, and because I was a newbie – I solicited his advice.

For several weeks, Bob and I talked regularly on the phone and met in person to do some ‘mock’ interviews. His advice to me? “The listener doesn’t want to listen a lot to you – they want to listen to the guest – so be well prepared, ask smart questions, and let the guest speak, and don’t interrupt him/her when they are speaking.”

Easier said than done because of my high-energy personality, but I heeded his advice and as time went on – his words of wisdom helped me become a better interviewer. I learned during the time I spent with him that underneath his ‘critical skin’ was a funny man, a very smart and worldly man. And although I disagreed with him on several political and religious issues, we did agree on this: we were both passionate about theatre, and we both enjoyed sharing our love of theatre with our readers.

Bob was very encouraging and supportive of my work. After he listened to my podcast with Edward Gero and Conrad Feininger that I recorded at Round House Theatre in Bethesda, where they were appearing in the revival of Nixon’s Nixon, he wrote me on June 29, 2008: “Best yet! You really drew them out as actors and they really come across as most intelligent and mature persons. I have always insisted that great actors are very smart and insightful people.

Only thing I would have asked is Conrad’s relationship to Lyonel Feininger. I saw some of his paintings in Madrid. Sheila says that he was Conrad’s father but I think he was an uncle. So I would wonder why Conrad didn’t follow in visual rather than performing arts. Also why he thinks Kissinger held on to his German accent when his brother (both came to this country at same time) lost his accent. (But then I am interested in language differences and how they influence individuals…like why I couldn’t get New Yorkers to get rid of the New York accent when I taught Voice and Diction at GWU). Bob”

That was vintage Bob Anthony! He would never let you forget that he could have done it better and that he had the experience to prove it – but at the same time – he would pat you on the back if he admired your work.

When my first monthly DC area theatre preview for BroadwayWorld was published on August 30, 2009, Bob wrote this to me, “Wow…a hefty bit of theatricana..how do you have the time to edit this huge column? Luck be with ye! Bob”

After I returned home from my a back surgery hospital stay in October 2009, Bob sent me this, “So everything is hunky dorey? That’s good. Now take good care of yourself and take those calcium supplements to strengthen those back bones which is connected to you. Bob.” Funny guy!

Bob was the first member of the press to wish me well when I became editor of Maryland Theatre Guide: “The site looks great and most important it will help our theatre community. Bob”

Bob was on a trip to Salt Lake City earlier this year when he fell seriously ill. He almost lost his life but miraculously the doctors stabilized his condition. He returned to DC and after a short time resting – a few weeks – he returned to a hectic schedule of reviewing.

It’s funny, our bodies were falling apart at the same time – in January and February 2o11 – and after I returned home from having some stents put in my ticker – and I was on my way to a theatre weekend in Philly – he sent me this on March 2, 2011: “You are incredible. But so am I considering that I bounced back so quickly after my Salt Lake City experience. I am back to doing shows nightly and reviewing. Got something every night until the 13th but the calendar usually fills up every night except Mondays. Bob”

I checked in with Bob over the past four months and we bumped into each other at the theatre several times, and the last time I saw him – his usual white shirt (which he always wore at the theatre) was replaced with a nice new blue shirt, and he was very perky. I asked him what happened to his white shirt and he said, “That whole experience in Utah convinced me I needed some new colors in my life.” We both laughed loudly, and then the mood changed quickly, for he had just seen his doctor and he was having some of the same symptoms he had in Utah. He told me his kidneys were not functioning well. I told him to keep me informed and then we compared notes about shows we had recently seen. His schedule for the week – which he recited to me – was pretty packed – as usual.

And I never saw or heard from him again.

I don’t know why – but I only went into the site twice in the last four weeks. I have always been a daily reader of his site. You know, some of his reviews made local actors and directors’ heads spin, and there were times my head was spinning like The Exorcist after reading them, but Bob believed that what he wrote was his honest reaction and opinion and no one was going to change his mind, and he was not going to apologize for it.

Today after I was notified of Bob’s death, I returned to the site and saw that his final review for The Cherry Orchard at Quotidian Theatre, was posted on July 25, 2011. It wasn’t pretty but it was vintage Bob Anthony

Mariya Danilenko gave the production 5 stars on Maryland Theatre Guide: “The focus is on the dialogue and on the characters, which the actors translated phenomenally. Director Jack Sbarbori receives outstanding performances from his superb cast…This mesmerizing production of The Cherry Orchard does justice to Chekhov’s genius. Do not miss it!”

But Bob – who always italicized his reviews – was the only reviewer in town who didn’t like this production. Everyone I know who saw The Cherry Orchard raved. Bob put it in the food processor and turned it on high speed – and Oy Vey – eyes were rolling again:

“In this production, they come and go like in a railroad station. Director Jack Sbarbori did a nice job moving these characters around the stage but I believe he “took off more than he could chew” as he didn’t seem to have spent much time getting a Russian attitude from his players. This is not the best production of “The Cherry Orchard” but it allows one to appreciate the genius that was Chekhov’s.”

I will miss Bob’s friendship and encouragement, and especially schmoozing with him at the theatre. Rest in peace Bob, and thank you!