In his mind-blowing, entertaining and yet intimate new cabaret show, What Makes Me Tick, Marc Kudisch divulges, among other revelations, that as a young boy, he longed to be Harry Houdini. Well, Mr. Kudisch works magic of a different kind in his delightful show, which is part of Signature Theater’s Sizzin’ Summer Cabaret series. Fresh off a critically-acclaimed run at Feinstein’s at the Regency, Kudisch has fashioned a tribute to songs and artists that have made him “tick” as the Tony-nominated and Helen Hayes Award-winning Broadway and regional musical theater star he is today. 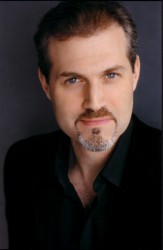 The title of his cabaret refers to a song cut from The Wild Party (the version composed by Michael LaChiusa), one of Kudisch’s numerous Broadway appearances. Kudisch starts the show teasing the audience with a variety of songs from his childhood that all start with the same downbeat (from Blood Sweat and Tears to Fiddler on the Roof to “Puff the Magic Dragon” to Cabaret).

Kudisch moves on to a segment highlighting tunes off of albums and 45’s that he discovered as a child in his mother’s chest of drawers, including LPs from Sammy Davis Jr, Elvis, Harry Belafonte, and Kudisch’s first exposure to a Broadway cast album, Stephen Sondheim’s A Funny Thing Happened on the Way to the Forum. In singing “Bring Me My Bride” from that Sondheim show, Kudisch showcases his marvelous trademark baritone voice that he has often displayed with flare on the Broadway stage.

Although known for his beautiful baritone, here Kudisch treats the audience to his less-often heard warm and appealing tenor voice, accompanied by an outstanding 3-person musical ensemble headed by musical director, Timothy Splain. In between songs, he regales enchanting tales from his early career, including his musical theater debut as Freddie in a high school production of My Fair Lady (for which he sings a toe-tapping rendition of “On the Street Where You Live”) and an inspiring story about his audition for the National touring production of Bye Bye Birdie, in which he won the coveted role of Conrad Birdie by trusting his instincts and singing “Sincere” after forcefully being told beforehand to choose another song. Kudisch further relates his experiences as a non-Jewish looking Jew cast as Reuben in Joseph and the Amazing Technicolor Dreamcoat and his revelatory visit to Israel.

In the next chapter of his show, Kudisch exuberantly pays tribute to two other things that make him tick: history and the “edge” – where he notes, both mistakes and positive change happen. Here he honors composers such as LaChiusa, Kander & Ebb and Comden and Green, all of whom Kudisch recognizes as changing the face of musical theater for their respective generations. Kudisch sings “Winning” a song cut from Kander and Ebb’s short-lived musical Steel Pier,and then a couple tunes featured in Comden and Green’s and Jule Styne’s Bells are Ringing (“I Found a Girl” and “Just in Time”), in both of which Broadway shows he appeared.

Finally, Kudisch closes the show with a chapter on the final thing that makes him tick – collaboration – in which he salutes composers Lynn Ahrens and Stephen Flaherty with “I Was Here,” one of his numbers from their The Glorious Ones and then regales the enraptured audience with a jazzy version “Bless Your Beautiful Hide” the opening song from Seven Brides for Seven Brothers and a Vaughn Williams ballad based on a Robert Louis Stevenson poem. His encore spotlights a recent Mumford and Sons folk ditty.

In his thankfully longer-than-usual splendid cabaret confessional, Kudisch proves himself once again to be one of the most electric musical theater performers of his generation.

Marc Kudisch: What Makes Me Tick was100 minutes long, and was produced by Signature Theatre – 4200 Campbell Avenue, in Arlington, VA. Although the final performance of this cabaret is tonight, you can still purchase tickets for the remainder of Signature Theatre’s remaining shows of their Sizzlin’ Summer Cabaret online or call the box office at (703) 820-9771.