Theatre Kibbitz: Matt Conner and Hunter Foster on The Hollow

The Hollow is a new reinterpretation of Washington Irving’s The Legend of Sleepy Hollow, with book by Hunter Foster (Summer of ’42) , and music and lyrics by Matt Conner (Nevermore). The multi-talented Sam Ludwig plays the infamous Ichabod Crane, with Whitney Bashor, who I adored as Clara in Philadelphia Theatre Company’s Barrymore Award-winning The Light in the Piazza, directed by The Boy Detective Fails’ Joe Calarco – is playing Katrina. And young actor extraordinaire Noah Chiet will be playing Pieter Claassen in The Hollow. Matthew Gardiner directs. 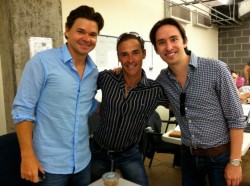 Joel: How is your reinterpretation of The Hollow similar and/or different than the original Washington Irving The Legend of Sleepy Hollow?

Matt and Hunter: I think when we first started working on it we wanted to distance ourselves from the novel as much as possible, to try and tell a different, but, similar story. But as we worked on it, strangely, the show started creeping back towards what Irving intended. What I love about the novel is the world that he created, his eerie descriptions of Sleepy Hollow and the odd characters that inhabit that world, AND, most importantly, the many different possibilities of the legend itself and what it all could possibly mean. I am hoping that people can walk away from this each having their own individual experience. I also think there are many parallels from this story to the world we are living in now: post 9/11 fear, tea-party/religious radicalism, and confronting  the monsters that live in all of us.

Take us on the journey of when you first decided to work together, to adapt this specific work of Washington Irving, and how long it took you to write the book, score and lyrics? You live in separate places – where did you write the show?

Matt and Hunter: We were working in Kiss of the Spider Woman at Signature Theatre when Eric Schaeffer approached us about writing a musical version of The Legend of Sleepy Hollow. The internet makes it so easy to pass along script and music changes. Plus I made many trips down to DC. It’s been about 2 years since we worked on it at the 21/24 lab at Signature Theatre.

What were the biggest challenges for you writing the book?

Hunter: I think adapting something, especially a classic like this story, can be challenging. You want to create a new experience for the audience that is different from anything that they have seen or read before. And I always want to try and make a statement about our current world and society in everything that I write. Plays like The Crucible were always my favorite because Arthur Miller was directly addressing something going on in our country. I mean, it would be easy to just set Irving’s story to music and be done with, but why do anything unless you are trying to make a point about something?

What scene was the hardest to write?

Hunter: The end. For obvious reasons. In Irving’s novel, Ichabod Crane disappears after being chased by the Headless Horseman. So, how do you dramatize that? And what does it mean? In the novel, it’s open to many different interpretations about what might have happened. Ultimately, we came to the same conclusion.

What scene is your favorite?

Hunter: A scene where Ichabod and Katrina are sitting looking at the stars. It’s very simple and sweet. It’s such a dual moment of feeling completely alone in a big cold universe, but also feeling content with the world because you are next to someone you are desperately falling in love with.

How would you describe your score for The Hollow? What musical themes we will hear?

Matt: I tried to create a world in the score of The Hollow that embraces this beautiful place which is so vividly described by Irving by borrowing sounds of classical music, with layers of harmonies that embrace a very rich traditional community – and finally a touch of dissonance which reflects one of America’s most known ghost story.

What was the most difficult song and lyrics to write?

Matt: My most challenging lyrics and songs were probably sections of the score that involve the Dutch language.

What is your favorite song?

Matt: My favorite song would be the beginning prologue entitled “Legend”.  I used images and colors from the text of Mr. Irving’s story to paint a world called “A pleasing land of drowsy head it was….”

What song that Matt wrote is your favorite?

Hunter: “Little Things” – The duet between Ichabod and Katrina from the scene I discussed above. The whole scene into song works really well for me. The song works so well because it starts in a place of two people feeling isolated from the world – and then coming together to create a whole new world that didn’t exist before. It’s that beautiful moment when two people come together and, suddenly, the world seems alive, wonderful and full of infinite possibilities.

What scene that Hunter wrote is your favorite?

Matt: My favorite scene that Hunter has written involves Henriette (Sherri Edelen Simpson) greeting Ichabod (Sam Ludwig) with a apple pie. Hunter’s humor in the show is wonderful and brings a life to the town that feels real and creates a fantastic light to the dark.

What did you learn about each other while writing this musical – that you didn’t know before you began writing The Hollow?

Hunter: I don’t want to sound pretentious but I’ve learned what a true artist Matt is. He really writes and speaks from his heart.

How has Director Mathew Gardiner and the cast brought your vision to the stage?

Hunter: Anytime actors begin saying lines and lyrics and bringing their interpretations to their roles, the characters suddenly become three dimensional and alive – and you start seeing things that you never could have realized by just sitting in your room with your macbook. And Matt Gardiner has brought everything together: the score, the plot, the staging, so we are all on the same page, which is what a director should do. And he’s helped hone all of our crazy ideas into one cohesive story.

What has been the most fun for you working on this project?

Hunter: I think anytime you create something that never existed. Just being in a room with actors and creating theatre is always a blast.

What do you want audiences to take with them after seeing The Hollow?

Hunter: I am hoping they each come away with something different. Each time I watch it, I see a new thing that could be a parallel to the world we live in now. I would love it if different people came up to me after the show and said, “I think it means this!” And every time, it would be something completely new.

The Hollow plays from August 23rd to October 16th at Signature Theatre – 4200 Campbell Avenue, in Arlington, VA. View the performance schedule, watch a preview video, meet the cast, and purchase tickets online. You can also order your tickets by calling the box office at (703) 820-9771.