Muldoon is a well-crafted and emotional production that unfolds like poetry on stage. Presented by the Seymoure Theater Company, Muldoon is now showing at the Mobtown Theater in Baltimore. It is written by Joe Dennison and directed by Chip Chiperson. Muldoon stars Stephen Deininger, Megan Rippey, and Lynda McClary. College professor and writer King (Deininger) and his teaching assistant Polly (Rippey) are stranded at a dingy hotel in Yucatán, Mexico. They meet a world-weary, alcoholic hippie named Pickle (McClary) on the sands of the Gulf. Muldoon explores the psyche’s of the three characters as they face death in its many forms. 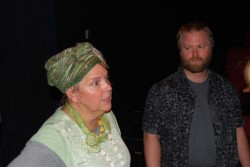 The three cast members all have impeccable timing. Several scenes rely on a choreographed crescendo of quick dialogue, and all three actors have mastered the material. Deininger gives an intense performance, crafting the character of King as a manic artist – both calculating and violently vulnerable. Rippey plays the seemingly innocent Polly as ethereal and mysterious. Rippey deftly portrays Polly’s every emotion, in stark contrast to Pickle and King, who are islands unto themselves. McClary is outstanding as the unpredictable Pickle. Her physical comedy is well-honed, and her raucous singing will make you smile. Sometimes it will make you cringe, as her character is apt to say things neither Polly nor King will say to each other.

The theatre is relatively small, providing the kind of intimate environment well-suited for a play with only three characters. The Set Decoration by Joe Dennison, Alex Lawson and Kendra Richard with a desk, fan and a lounge chair is sparse, but enough to ground the setting firmly on the coast of Mexico. The lighting by Alec Lawson and Kendra Richard is creative without being distracting. They do a great job of simulating the reflection of water in a few key moments. The subtle sound effects by Dave Kiefaber add to the buildup of tension. The raised platform upstage, as well as Chiperson’s blocking, lends to the illusion of multiple locations, even in such limited space.

Muldoon examines the creative process, and the war against inaction within an artist’s mind. It touches on the need for control, both artistically and otherwise, and how infuriating the lack of it can be. It also investigates the relationship between three very flawed and complex human beings. The dialogue is charged with the electricity of repressed pain. Dennison showcases his skill in Muldoon as a master of motifs and refrains.The Beatles and T.S. Elliot are important thematic elements in the play, and Dennison’s magnetic writing style evokes both.

If you aren’t already, Muldoon will have you pondering sex, death, and art for the rest of the weekend.

Running time is two hours, with a 15 minute intermission.