Ragtime at The Theatre Lab School of the Dramatic Arts

The talent and expertise of the young performers at The Theatre Lab School of the Dramatic Arts always amazes me and their most recent production was no exception. Ragtime is an emotionally powerful show with challenging vocals and a large cast, and Theatre Lab delivered a wonderful production of this classic show. 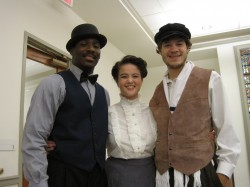 Where Theatre Lab truly shines is in the performances of its students. Ashley Nicholas’ rendition of Sarah’s “Your Daddy’s Son” – my favorite song of the show and one that is extremely challenging – was powerful and ably delivered. Will Hawkins gave a nuanced and excellent performance as Tateh. His rendition of the emotional “Gliding” and his duet with Katie Gerard’s Mother, “Our Children” were the highlights of the production. Kenneth Washington sang Coalhouse Walker’s songs proficiently. I particularly enjoyed his performance in “The Gettin’ Ready Rag.” While the leads were talented and gave wonderful performances, their singing was somewhat muted without microphones and at some points I had difficulty hearing their solos.

The ensemble sang beautifully and their combined voices were much more able to fill the room and pull you into the show. With such a large cast, their numbers could have easily descended into chaotic vocals – but their voices melded together nicely to create beautiful sounds rivaling professional productions.

Pauline Grossman’s group choreography and Deb Gottesman’s creative direction in this production were wonderful, and it was stunning to watch such a massive cast move in a tight space without missing a beat. The Theatre Lab made creative use of their space to pack a sold-out audience into seats without losing the ability of its performers to get on and off stage with their various accoutrements. Even though the audience was set up on both sides of the stage area, the action was very balanced and I never felt like I was missing out on anything the other side was seeing.

Musical Director Brian Lilley and his group of four other musicians played Stephen Flaherty’s Tony award-winning score beautifully. Marianne Meadows’ lighting was excellent with only a few moments where it felt imbalanced because only the opposite side of a lead character was lit. I thought the costumes were wonderful and colorful, especially considering the size of the cast that they were required to accommodate.

The Theatre Lab pulled together yet another powerful production with this beautifully sung Ragtime – and again tapped into their talented and well-trained performers to please audiences with their excellent work.

Run and see this excellently implemented show, though it’s only running through tonight. If you can’t make it, I’d recommend keeping an eye out for future Theatre Lab productions.

Ragtime plays at The Theatre Lab School of the Dramatic Arts – 733 8th Street NW, in Washington, DC. There are two performances today – Saturday, August 13th – at 2 PM and 7:30 PM. You can purchase Standing Room Only tickets at the door.