Something Past in Front of the Light at Longacre Lea

Longacre Lea presents the world premier of Something Past in Front of the Light, an ambitious comedic drama about a group of artists who collaborate with Satan in the hopes of creating a documentary about his life, written and directed by Kathleen Akerley.

Upon first sight, the set, designed by Mark J. Wujcik, seems to resemble a simple workspace, with a cluttered desk and four chairs. However, it takes a moment to notice the fact that the opposing wall isn’t in fact a wall, but a gigantic and impressive ‘television screen’, and that the floor is nearly entirely covered with a sketch of a demon, made up of shades of gray that I initially mistook for aging stains. Lighting Director John Burkland does an effective job, assisting the mood of the play with precise lighting and occasional blackouts. He is partnered with Sound Designer Neil McFadden, and we are treated to twittering birds to anxious hospital sounds. Costume Designer Anna Lathrop clothes the actors in mostly casual attire, with the exception of a few tattered shirts and some biblical robes. All of these designers do fine work. 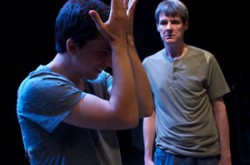 The story is centered on The Devil, fantastically played by Alexander Strain, as he attempts to cooperate with an artistic team in order to film a documentary about his life. This team is made up of the director, Richard Widener, played by Christopher Henley, cinematographer Jacob Pearson, played by Jason Lott, and narrator Michael Montague, played by Daniel Vito Siefring. Together, these men make up an extraordinary ensemble, from the jerky, spastic movements of a hunched devil to the wide-eyed believability of the director. They are accompanied by a team of talented actors who play out progressing scenes from behind the television screen, most noticeably of whom is Jay Hardee, who steals the audience’s attention in a memorable scene where he swirls around the stage as a manic devil impersonator. I would most definitely recommend seeing this play based on the outstanding performances alone.

Where this play gets tricky is the dialogue. If I didn’t read a brief summary of the play before the show began (and it became apparent that not many people did), then you might be subjected to a full half-hour of confusion as the plot struggles to the surface through a series of arguments among the characters. The concept takes far too long to grasp, and I find myself nodding my head in agreement as I overhear a woman tell her fellow during intermission; “For a while they seemed to be talking straight nonsense, didn’t they?”

Once the plot itself is understood, it still – at times – remains difficult to follow throughout the play. The discourse is extremely dense and verbose, with many literary and cultural references thrown in. Even so, the dialogue is so swift that my brain is really only able to register “Hey, neat, a nod to Milton,” before being thrown into the next complex sentence, rendering myself unable to digest the actual reference.

This bewilderment seems deliberate to a point, as The Devil  himself proves nearly impossible to understand. The artistic team that surrounds him nearly pulls their hair out as they argue with him about things such as his childhood and the crucifixion, right down to the concept of reality television. “Why this passion for coherence?” he asks, causing the dubious team to seethe with frustration. Just when they think they have reached an understanding, The Devil unravels all their progress. Did he or did he not rip their missing narrator into shreds?

I feel that I could ‘maybe’ fully appreciate the nuances of the play after sitting down with the script and reading it through several times, but not with just a once-over. While the dialogue is convoluted, the plot itself is interesting, and the acting is remarkable. In a final moment of genius, Henley remains sitting during the curtain call in the same position of shock that he ended the play with, causing Strain to playfully walk up and nod his frozen head for him. He remains this way until the very last person files out of the theatre. If this play left me with one thing, it was a deep respect for acting as a craft, as I poked my head back through the door after I left and saw him still sitting there, eyes wide.

Running time is 130 minutes, with a ten-minute intermission.

Something Past in Front of the Light plays through September 4th at Longacre Lea at Catholic University’s Callan Theatre – 3801 Harewood Road NE, in Washington, DC. Order tickets by calling (202) 460-2188, or by ordering them online.