I was elated when I heard that Stephen Gregory Smith was going to play Billy in The Boy Detective Fails – because he was born to play this role. After seeing him sing the role in a staged reading in July 2009, at Signature Theatre, I kept praying that when a full production was staged  – he would play the role again. Here we are two years later and there he will be on the Max Stage playing Billy. I may not be a religious man – but thank you Jesus!

Stephen: It is about a former child detective, who in his adult life, and after a ten year stay at a mental institution, re-enters his childhood hometown and tries to solve the mystery of his sister’s death. It is a story of loss, but also of hope. Despite it’s dark subject matter, it is a joyous and funny story that breaks your heart into pieces and then puts it back together again. 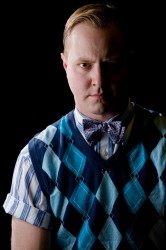 You have played Billy in workshops of the show here at Signature. Tell me about that.

The workshop was part of Signature Theatre’s 21/24 Lab. We had three weeks in the summer of 2009 to work on this show and then had presentations of the material for two nights. These weeks were absolutely key to character development and establishing a clear ark. We got to know these characters and the world of the play. The work that we all did in those three weeks laid the foundation for all the work we have continued to explore two years later.

What do you love most about playing Billy Argo-Boy Detective?

I love the unexpected moments of joy that he experiences. I love when he is surprised by anything.

How much of the real Stephen Gregory Smith is in the way you play him? How do you relate to Billy?

Not much. He’s a very damaged little toy. He starts the show out so fragile, he might break, but sheds outer layers as the show goes on. His growth and learning curve is very interesting. I relate to his pain and loss. I think everyone has lost someone and wishes that they could solve the mystery of why, and where are they now.

How does Billy grow and change during the musical?

In many ways…I don’t want to give too much away. His journey is very complex and feels like riding a roller coaster. Then he meets his love interest, Penny Maple – a kleptomaniac schizophrenic. His journey gets even more complex from there.

Anika Larsen is playing Penny in this production. What do you like most about working with her and what impresses you the most about her performance?

I adore her in every way. We have had a fantastic time from day one. I think we just get each other, and fit very well together. She is very much like me in a rehearsal room as well, and is all about memorizing the scene and jumping in and trying things. Not only is she a fantastic singer, but dancing and acting are tremendous. I am honored to share the stage with her, and every single amazing cast member of this rep company.

Adam Gwon has written a wonderful score for The Boy Detective Fails. Tell us about the score, and your favorite songs in the show.

Yes he has! I have many favorites, from the haunting “Caroline” to “I Like”, but I really love “Let Me Save You”, a song I have the honor of singing as Billy finally is hot on the trail of solving his mystery. It is a true superhero moment, and as a comic book reader, I love that. I get to try to be every action hero I always wished that I was, but on a human level. I also love Adam’s use of vocal underscoring. It is creepy/gorgeous.

Joe Calarco – who I admire so much – is directing you in the show. What advice and suggestions has he made that has made your performance better?

Every single word he utters, pretty much. Joe has really helped me tap into the places I need to find as Billy, and has taught me how to experience the positives, a hard thing to do in a character so damaged and terrified of the world. The best way to sum it up, and a day that clicked for me, was him simply saying to me that I should think more about tunnel vision. That small phrase made everything else make sense.

What are some of the themes of The Boy Detective Fails?

Hope. There is a line that Penny Maple says that is a big one, where in the face of trying to answer a very hard and painful question, she tells me to ‘start small.’ Start small. I will apply this to the rest of my life.

Joe Meno has adapted his novel for the stage. Have you read the original novel, and if yes, how different and similar is this new stage production?

Yes, about 27 times! It is different in many ways, but I feel like it focuses the story to it’s strongest points and concentrates on them. But fans of the book will see small homages to things that aren’t fully there in the musical.

What is it about this show that has theatre lovers like me believing that it could be a smash musical in The Big Apple?

I know nothing about Big Apples, but what I do know is that the show’s heart is one that beats strongly and defiantly. You would never think that this book would end up being a musical.

What has been the most fun for you working on this project?

This role is my all time dream role. Every single day is fun. Everyday, I can’t wait to get to rehearsal and explore the show more. The set is a playground of riches, the staging is brilliant and great fun, the score is exciting and rewarding, and the people are all a dream come true. What more fun can you have than that?

What do you want audiences to take with them after seeing The Boy Detective Fails?

I want them to go dust off their Dick Tracy comic books, or Nancy Drew books. I want them to watch their children discover the world with a sense of wonder and try to remember when they did the same thing once upon a time. I want them to call up that childhood friend that they have put off calling for some time and ask how they are. But more than anything, I want them to then come back and seethe other AMVP rep show, The Hollow, and appreciate the vast amount of work being done by the core of the rep company, and how different it is. The actors of the AMVP rep are the hardest working actors in Washington at the moment, and I hope everyone sees how effortlessly they pull that off.

The Boy Detective Fails plays from August 25th to October 16th, at Signature Theatre -4200 Campbell Avenue, in Arlington, VA. View the performance schedule, watch a preview video, meet the cast, and purchase tickets online. You can also order your tickets by calling the box office at (703) 820-9771.